Nuttinglikit Grove was plotted, established and plotted out by Edwin P. Nutting many years ago. The homeowner association documents that govern the use of real estate in Nuttinglikit Grove were recorded with Lee County Courts in September 1955. Bonita Springs was certainly a much smaller town then and real estate development wasn’t nearly what it would eventually become.

The documents for the Nuttinglikit Grove association are a glimpse into yesteryear. The entire set of documents is simply six pages long. Life was more uncomplicated in 1955, wasn’t it? Bonita Springs Florida real estate became more complicated over the years or maybe the developers did.

The homeowner association at Nuttinglikit Grove is more or less voluntary with no fees except for an occasional voluntary donation for a minor repair to signs or road. The community is laid back and casual. The neighborhood is not pretentious and residents wave to each other while out and about.

A variety of homes in Nuttinglikit Grove feature guest cottages, in fact guest cottages are permitted as read in the HOA documents. The mother-in-law style cottages are generally about one half of the size of the main home. There is plenty of room on the lots because most lots are at least one quarter of one acre. Some lots are larger. Cottages are used by their owners as artist studios, game rooms, work rooms, craft rooms or rental units. It's almost like owning a duplex while actually living in a single family home. 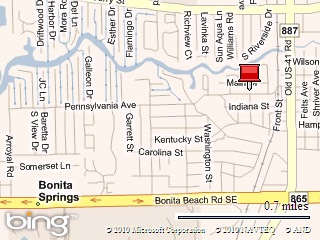 Rental permits are required by the City of Bonita Springs and can be applied for at Code Enforcement at the Liles Hotel at Riverside Park, Bonita Springs, Florida.

A few of the lots in Nuttinglikit Grove actually border the Imperial River and offer gulf access. In addition to the Imperial River there are a few canals with lagoon docks for small boat and canoe or kayak launch. Though the docks aren’t technically deeded to each property nearly each home has had a dock spot for generations without issue.

Other nearby communities include Rio Vista Estates and Penn Dell Park.

Location, location, location! Rare opportunity to own in Downtown Bonita Springs. Fully remodeled home features 3 bedrooms, 2 baths, and an office, and sits on an oversiz...