The community of Bonita Bay is a 2,400-acre master-planned community in the heart of Southwest Florida. Situated in Bonita Springs which is also known as “gateway to the gulf”, the community of Bonita Bay incorporates a range of delicate ecosystems and nature preserves, from marshes to mangrove stands, hardwood hammocks, the pristine Imperial River and Estero Bay all of which connect and lead to the Gulf of Mexico.

Lifestyle- Bonita Bay is Southwest Florida’s renown, one of a kind lifestyle based community which includes golf, tennis, fitness, swimming, fine dining, private beach and marina access.  There is really no other country club community in South Florida which offers more recreational amenities than Bonita Bay. 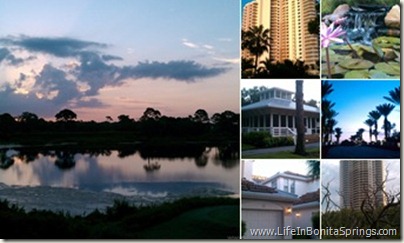 Tennis - The Bonita Bay Club tennis program is the areas most active and competitive and is headed by a United States Professional Tennis Association master professional.  The Bonita Bay Tennis complex offers 18 clay courts which were recently renovated.

Fitness - A staff of licensed athletic trainers and fitness specialists motivate the Bonita Bay Club members in its 10,000-square-foot fitness center, which was re-vamped in 2010. The adjoining swimming pool is another option for fitness classes, individual workouts or a recreational swim.

Dining - Only the Bonita Bay Club would offer two dynamic clubhouses, each providing exceptional cuisine, from casual lunches to elegant dinners which include exceptional wine lists to complement the dining experience, and a professional dining room staff.

Nature - Bonita Bay Club is locally, regionally and nationally recognized for its tradition of environmental stewardship and award-winning landscaping. Intertwined amongst the foliage and mature landscaping are miles of walking paths.  Read also: Bonita Bay Jogging & Walking Trails.  Throughout the community it is not uncommon to see wildlife such as, otter, bobcat, deer, manatee, exotic water fowl, unique reptiles and more.

Gulf Access Boating - The Marina Club at Bonita Bay offers both wet and dry storage for over 400 boats, waterfront dining at Backwater Jack’s, social and educational activities, and direct gulf access via the Imperial River through Estero Bay. The Marina offers a bait shop, fuel pumps, marine service, dressing facilities and a fully stocked ships store plus sightseeing and fishing charters can be scheduled. 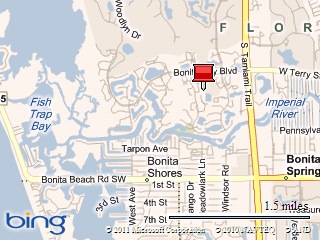 Destination Location - Located midway between Naples and Fort Myers, is bordered by Spring Creek, the Imperial River and Estero Bay. More than 1,400 of its 2,400 acres are exclusively devoted to open space, including lakes, nature preserves and the network of biking and walking paths.

Incomparable views, impeccable design and in immaculate condition. Live and entertain in recently built and exquisitely appointed sky-home. Spacious, must have luxury ame...

Stunning views and sunsets overlooking Estero Bay, golf and lake from the balconies, and all of the rooms in the home. Bright and open floor plan that features a great ro...

Come watch the beautiful sunrise and sunsets from the 2 outdoor terraces as well as bay or golf course views from every window! This 3 bedroom plus a den residence is mov...

Come experience the VIEW of a lifetime from the 12th floor in Azure of Bonita Bay! Take advantage of this rare opportunity to own one of the most desirable homes in Azure...

Stunning panoramic views and sunsets over Estero Bay from this 2 BEDROOM plus DEN, 2 BATH luxury residence at Esperia in Bonita Bay. This well appointed home with open ...

This end unit, in Bayview of Bonita Bay, offers over 3,700 sq ft of living space UNDER AIR! This 3 PLUS DEN home can be your seasonal retreat or your primary home. The si...

H7603- Gorgeous Estate Home on an oversized lot with a coveted lake view & Southern exposure for sunny days & beautiful sunsets! This home has it all! The two-story foyer...

C7474- This 23rd floor, Contemporary 3-Bed plus Den, south end of building, with a sought-after floor plan has been modified to allow for sweeping views of the west to so...

This beautiful 2 BR plus den, 2BA home w/addl office space is nestled among the oak trees in the charming "Burning Tree" neighborhood. Vaulted ceilings in living/dining, ...

Welcome to your home in the sky! As you enter this NEWLY UPDATED 17th floor condo overlooking Estero Bay & the Gulf of Mexico, you will be struck by the MESMERIZING VIEWS...

This half acre property is located on Imperial River in Riverwalk at Bonita Bay, one of Southwest Florida's most prestigious communities. The sight offers highly sought a...