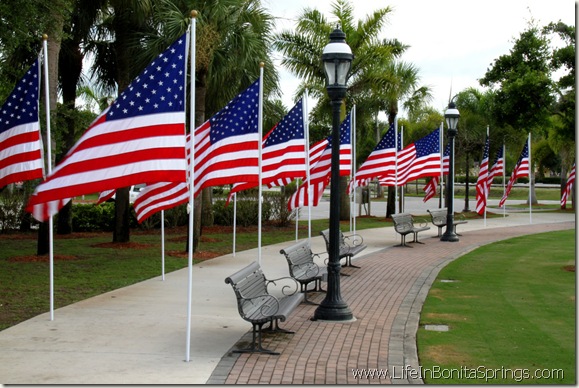 BONITA SPRINGS, Fla. (May 26, 2011) – A real pyrotechnic grand finale will highlight a high-powered laser light show as darkness falls in Bonita Springs on Monday, July 4th, 2011 at the City’s annual Star Spangled Bonita celebration. The light display will conclude the City’s annual Party in the Park beginning at 6 p.m.

Independence Day kicks off with the traditional morning parade presented by Bonita Springs Fire Control and Rescue District, and reconvenes at Riverside Park at 6 p.m.

A full schedule of live entertainment includes Jay Frost & Three Below and Cahlua & Cream, an array of children’s amusements, and traditional July 4th events culminating with a laser light show and fireworks display.

For the first time, Bonita’s own Captain Johnny O (#3 Johnny Depp look alike) will perform. He returns to Bonita Springs after a series of appearances for Disney impersonating Captain Jack Sparrow.

Children’s games include a waterslide, water balloon toss, potato sack races, beach ball rolls and much more. Many trophies will be awarded.

Admission is free, and refreshments will be sold with a portion of the proceeds donated to the Bonita Assistance Office.

The artist cottages in the Liles Hotel plaza will be open. Riverside Park is located in the historic district of Bonita Springs on Old 41 and Pennsylvania Avenue. Guests are encouraged to bring their own lawn chairs, but to please leave their dogs and coolers at home.