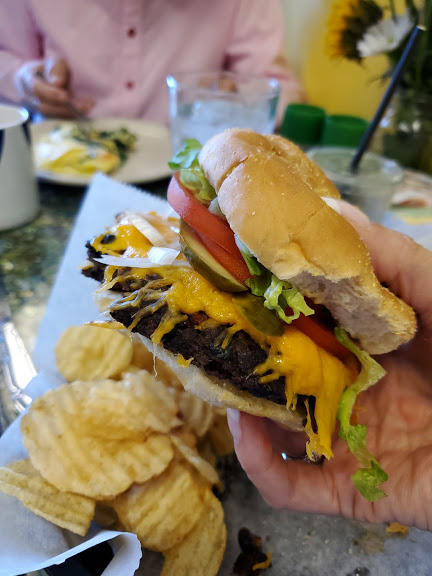 We get to mix a little business with pleasure regularly so when I had to pick up a lock box and listing signs from Country Creek in Estero I offered Jerry lunch to keep me company.  It had been a while since we had visited Restoratives Café so that was our lunch choice. It’s one of the few places we can both get something to eat. I tend to lean to the healthy side of eating and he is a meat, potatoes kind of guy. 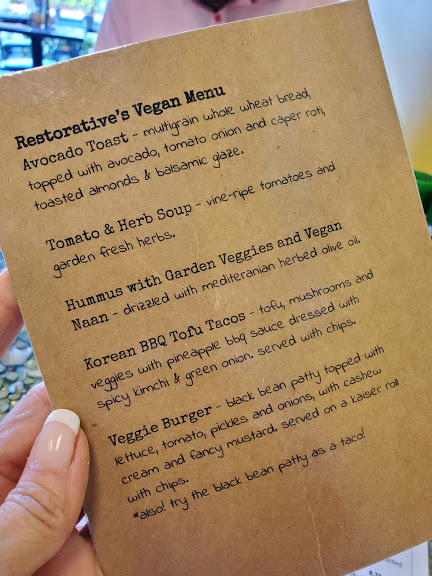 To my surprise I noticed a vegan menu on the table, in addition to the regular menu. I ordered off of the vegan menu but corrupted my black bean burger with a little bit of cheese.  Jerry ordered an omelet and a cinnamon roll to go (for the next day).  Everything, per the usual was delicious.  I had two clients who I sold a home in Belle Lago who saw my post about it they went the next day.  They were pleased with their lunch, too.

I texted a photo of the menu to my daughter who is watching her carbs and she suggested that she would order the black bean burger on lettuce to cut out the wheat.  Great idea!

Restoratives Café is located in Estero Florida on US 41 just north of the light at Broadway.  You can read their menu here: www.restorativescafe.com