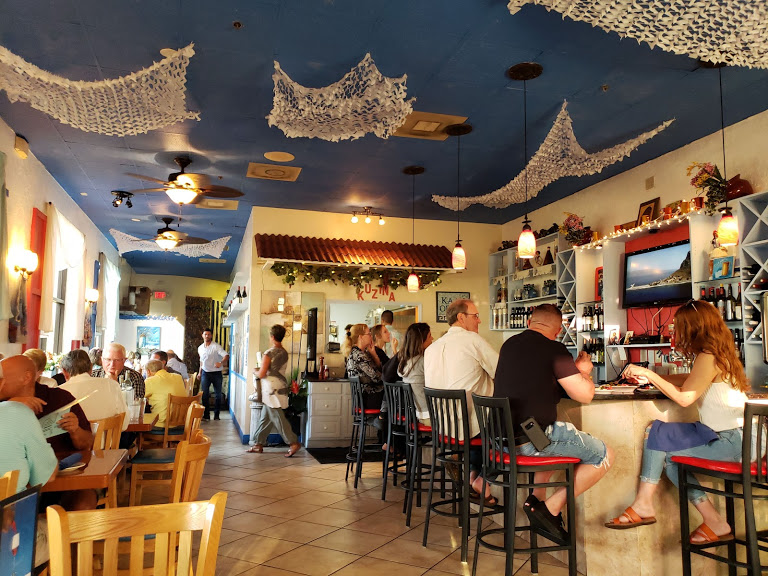 Honestly, this is one I am torn telling you about this… mostly because I don’t need the competition for a table.  I had heard about this tucked away Greek restaurant somehow and one magical day I threw it out there when we were having our typical “negotiation for where to eat next” conversation.  Jerry agreed to Greek and off we went to Mykonos Kuzina. I was in the mood for falafel and their falafel did not disappoint. Our entrees were Vegetarian Souvlaki for me and Pork Souvlaki for him.  Amazing grill kabobs of vegetables and pork.  There is a choice of several sides.

We’ve been back a few time since and the meals are consistently good.  I even ordered take out for my daughter and she loved it. Jerry’s had chicken, pork and lamb and is looking forward to the beef and branzino.  The owner says his favorite is his hand cut veal chop.

Mykonos Kuzina is running great summer dining specials, like many restaurants do.   Summer of 2019 special are two dinners and a bottle of wine for $29.99.  We’re non-drinkers and much to our delight they offer a dessert in lieu of wine!  We’re disappointed at many of our other favorite places that run summer specials with only alcohol included.  Most haven’t embraced that not everyone drinks.

Mykonos Kuzina is located 13510 Tamiami Trail, Naples, FL 34110 which is at the traffic light at Wiggins Pass Road behind the Walgreens.