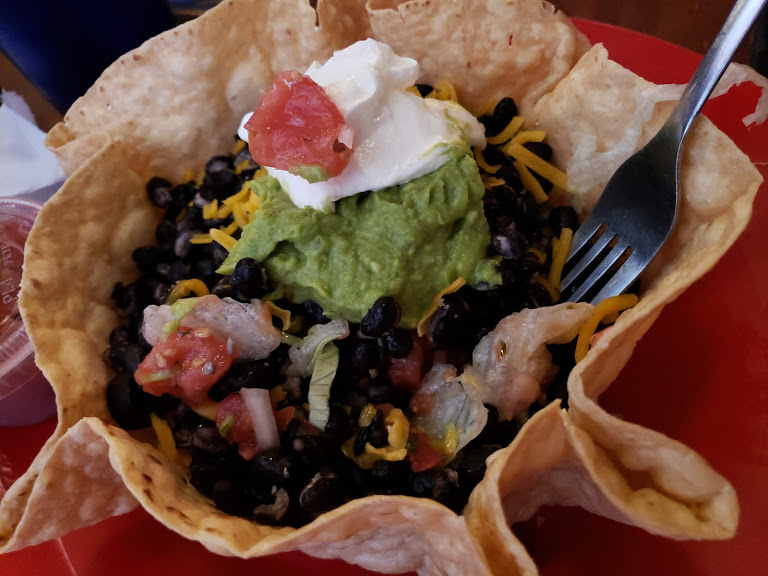 Since I moved to Bonita Springs in the mid 1980’s there has been one constant in Downtown Bonita Springs, Florida … Buffalo Chips.  One of the signs in the back reads “an upscale dive” and one of the signs in the front reads “hippies use the back door”.  It’s a colorful place, to say the least.  It’s a fast moving ‘hole in the wall’ that is locals hangout that has been discovered by everyone.

Tourists come from miles around.  There’s never a parking spot out front or out back so they expanded parking to a fenced lot down the street.  Buffalo Chips serves the hottest wings and the coldes beer in town but they do offer plenty of other types of food. Even picky eaters can find a bite. I modify the taco salad and enjoy it meat free. Jerry is all in and either get the short ribs or fish.   The youngsters in the family get wings.  For the most part we are all water drinkers so there isn’t a beer review.

If you go know that they have a wait during dinner hour during season.  It’s a popular place. It’s also noisy so if you have kids they’ll blend right in.  There are a few arcade games in the back room.

We have another post on ‘Chips if you’d like to read it, here: Buffalo Chips Restaurant of Bonita Springs, Florida and there is also a hilarious video we all made back in the day before Jon and Angela were married and had kids, here: Video of Buffalo Chips