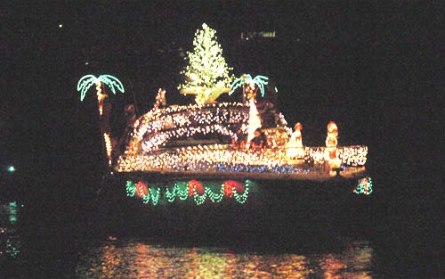 It's not just Bonita Springs, Florida ... almost all inter-coastal communities have a holiday boat parade!

The 21st Annual Bonita Springs Boat Parade is scheduled for December 08, 2007.   If you aren't registered to participate should start planning where you'll park to see the show.  Popular locations for parking and viewing included the Imperial River Boat Ramp and The Riverview Center (for parking) with a walk to the Imperial River Bridge for viewing.  Additional shopping center parking is nearby at the Fresh Market - Office Depot stores.

Bring a chair,  jacket or blanket, flashlight and wear reflective shoes for safety.

The parade route begins at Fish Trap Bay, turning around at Holly Lane and Esther Drive just north of Brendan Cove.  The parade ends at The Fish House Restaurant on Bonita Beach Road where awards will be presented.

Prizes in the following categories will be awarded as follows:

Here's the low down: