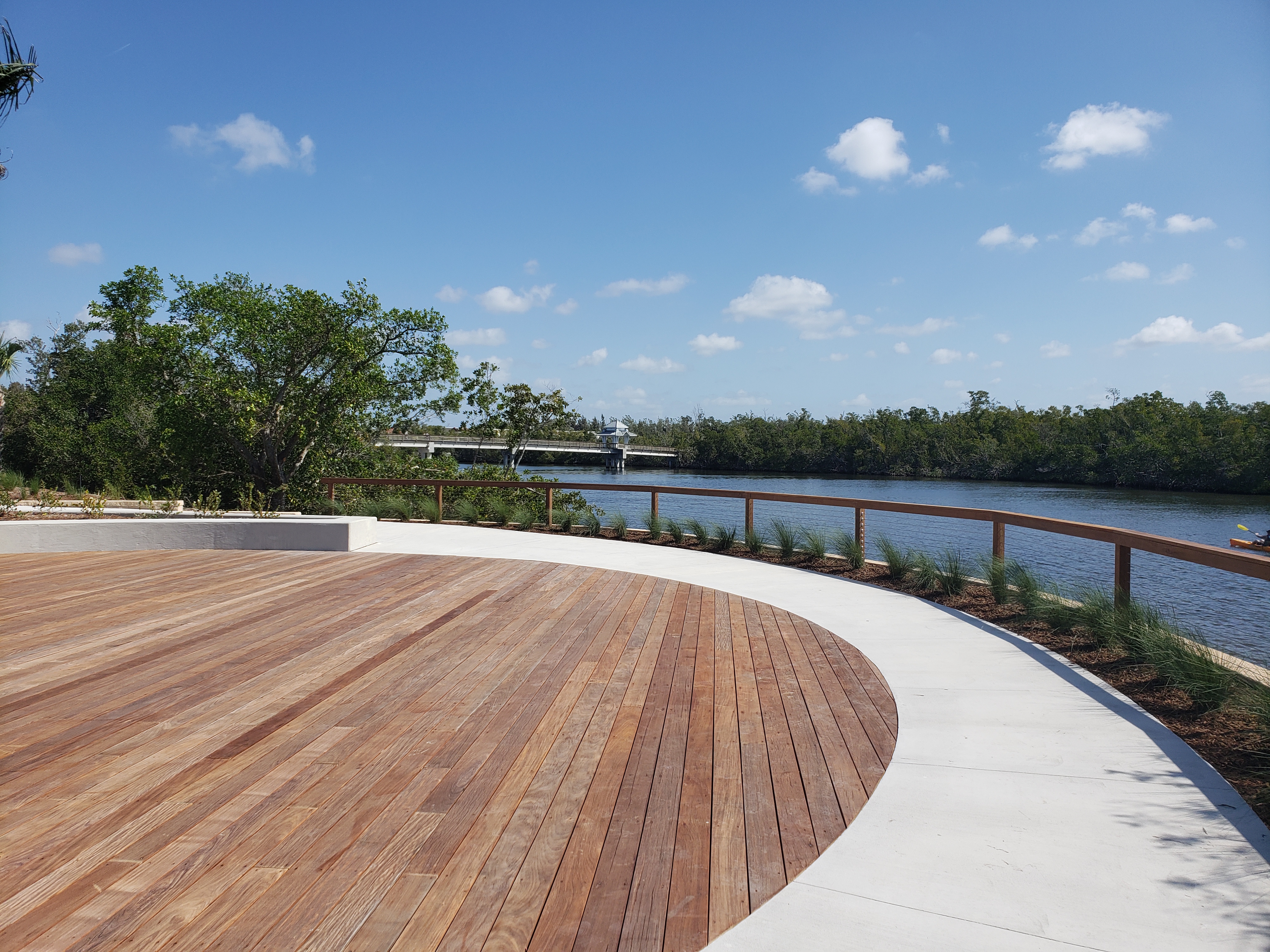 As a resident of East Naples, the most exciting part of this 15 acre park is the bridge that brings downtown Naples within easy biking distance of East Naples. The bridge is just over a half mile from the Airport Observation Deck on North Road.

I finished up early with a small job at the airport on the day the park opened and had my bike in the truck so biked over to take a look. I took a few pictures, as always, but I didn’t stop to take notes and later recorded them from memory.  It’s quite a lot to take in and to figure out how to describe. It is an elaborate park - I guess those are one word that comes to mind. When I sat down to write an article the first time, I just ended up with my included notes. So, I took a second bike ride to take a look again this morning, my primary purpose being to see firsthand what a bike ride from the airport to the beach entailed.

The overall impression from my two visits to Baker Park is that it is brand new and a lot of people are checking it out. I saw a trio of hikers when I left the airport parking lot that I saw again as I was entering the park on my return trip from the beach. I only make note of this because it occurred to me that these were people who lived on the other side of the river checking out the side I live on, while I was checking out the side they live on. So, it brings the community together, I guess, in a common enjoyment of the public spaces made possible through the generosity of a lot of Naples residents and philanthropists way.

I’ve worked for civil engineers in the past, and so I found the storm water treatment areas interesting. Mayor Barnett briefly mentions the storm water design in this video. There are a number of small detention basins with outlet control structures along and crossing under the paths.

There are water fountains, even one for pets, or filling a water bottle.There do not appear to be restrooms available at this time, but I think they are in the process of building one near the foot of the bridge. (According to the Mayor in the video, they were planning on making a restroom facility right at the drop off circle.) Baker Park Phase 1 was opened in March 2019 so other amenities will be installed as time progresses.

There are ample trash cans, as well as barbecue ash disposal bins near the several picnic areas with at least three modern looking barbecue grills.  Not all parks in the area have trash collection and are considered pack in/pack out parks.

The kayak/paddleboard launch area has storage racks that are probably available to rent, similar to the boat storage program at the beach. There is at least one pet waste disposal bag dispenser which is good because the dog park is around the corner so there are going to be a lot of canine guests.

The trails at Baker Park are a combination of concrete, asphalt with wooden boardwalk bridges. If you are looking for fun things to do with kids in Naples, this would be the place.  There is something to do for everyone in the family.