Where do all of the Refrigerators go? 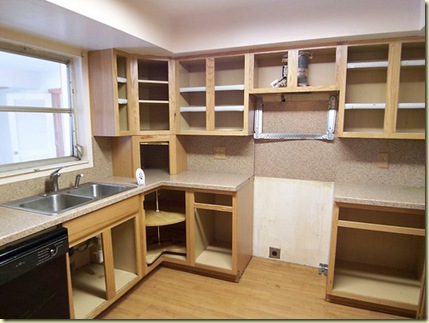 Home buyers and real estate agents have become used to to the echoing hollowness of a kitchen with no appliances. The surprise of it has worn off, especially in communities with excessive amounts of short sales or foreclosures.

If they were included in the mortgage, they’re not likely paid for. Yet, the owners are technically allowed to do what they want with their appliances. It just makes the homes harder to sell when they’re missing and it’s just dragging the entire process out even longer for everybody. Even the people that aren’t in the crisis

While previewing a short sale property in a gated community I noticed all of the appliances were gone. Sometimes the big ticket items, like the fridge or the front load clothes washer and dryer are gone but usually the microwave and dishwasher are left behind. This house didn’t have zip.

This one just struck me funny. It was a decent home with tons of upgrades but the appliances were gone. It had obviously been lived in and wasn’t a run of the mill, armchair investor, special. The electric was on and the pool equipment was running.

Where would they take the appliances anyway? How do people even sell them? The market has to be flooded with random, excess household appliances.

I checked the public records to see where the owners lived and to see if it was possible that they just dragged them over to another home they owned. It didn’t seem practical, they lived a stone’s throw from Canada and the cost of shipping them wouldn’t be worth it.

I hit up Craigslist out of curiosity. I went to the Fort Myers section of Florida and performed a simple search for “stainless steel”, not even appliances. Why? Because, it’s often the stainless steel appliances that get hocked and I was sure that a home of this caliber would have had stainless appliances.

Jackpot. The out-the-back-door trade of household appliances positively flourishes on Craigslist. I perused image after image of refrigerator, oven and household accouterment captured at a moment of time when it was still surrounded by granite and pickled maple cabinets. Sometimes they were still sporting their energy efficiency rating sticker, which I guess makes it almost new.

Further down the list I ended up clicking on a listing for an entire set of investor white appliances. The ad came up in my search simply because it mentioned stainless steel. The ad reads in part: Replaced these appliances with stainless steel. These are three years old, used very little, all in excellent condition. All matching. New $3,000 will sell for $1,200.

I’ve since learned that the short sale is now about to go back to the bank. It makes me wonder if the people that buy it “bank owned” will be snagging gently used appliances from their neighbors, craigslist or brand new from the big box.