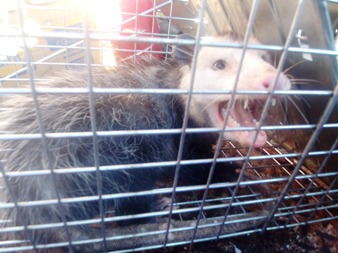 How to Trap a Possum in Bonita Springs Florida

Thump, thump dragging in the night is the creature from the black lagoon somewhere near the foundation of my house.  Lucky for us whatever it is, it is nocturnal.  Oh goodie!

Finally, at the end of my rope and being the anti-animal killer I am I called a Bonitian named Lumberjack and asked him:

Listen, I have no problem with whatever IT is, but it has to go.  Go peacefully, it will, but it has to go.  Lumberjacks says head north.  So I head norht and I ended up ordering a Havahart trap from the Northern Store in South Fort Myers, about 10 miles north of Bonita Springs.  It took about a week to come in.  We picked it up yesterday and put it outside with a slashed in half apple inside as bait.  (there is a bait guide that came with it in case you know what your nemesis is)  I rolled the dice and threw in an apple by default.

This morning at 5:30 when IT was coming home I realized IT must not like apples.  I never heard the trap but I heard him wiping his feet as he went into his den or whatever you call it.  I ended up poking my head out back just to see what the status of the apple was...maybe it was light enough to sneak in and get it without tripping the snare.  True enough, the apple was gone and in its place was Hector.  Hector - Possum Extraordinaire, with a face only a mother could love and chompers that commanded every bit of respect they were definitely going to get.  (I was SO relieved it didn't have a white stripe down it's back, actually.)

I called Lumberjack and made a deal.  I'll cook you two egg, cheese bagel sandwiches for breakfast if you take Hector out past Bonita Grand Road.....like waaaayyy out, past Village Walk and San Remo even.  Out by the state land, is more like it.  Our deal was struck and Hector is free to roam on the great prairie in East Bonita Springs.

Viva la Hector .... In the wilderness, not under my house.

Yes, if you are dealing with your own Hector and need Lumberjack to make a house call just email me and I'll give you his cell number.  I gave him the trap as a bonus.

You Sandy Hollow people might be on your own....we have no clue what bait is used for Iguanas!