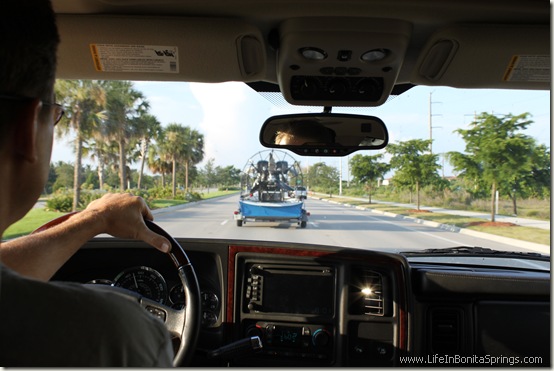 After the inaugural “new prop” run and guest starring on a future episode of “Cops”, Lumberjack invited me out in the boat with some friends.  (Yes, it’s was a filmed episode with Wildlife officers.  Only my kid.)

There are a few rules to airboat club, twelve to be exact.

The second rule about airboat club is be on time at the crack of dawn.  Gah!  I had four other people to bring, besides myself, which was like herding cats.  We ended being up 10 minutes early because I started an hour early. 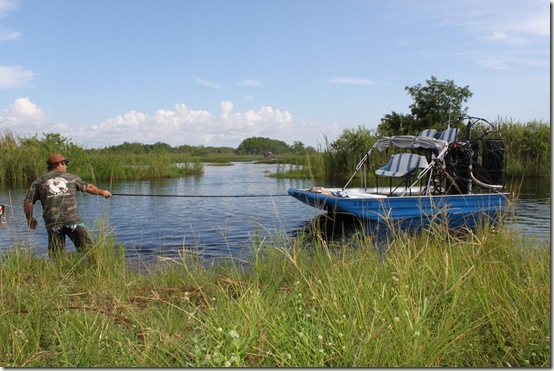 The third rule about airboat club is always show the airboat who is boss.  Lumberjack is livin’ large and in charge.  I think I heard the boat whimper. He *demanded* the boat be pulled to the bank so the pansies afraid of gators could get on. 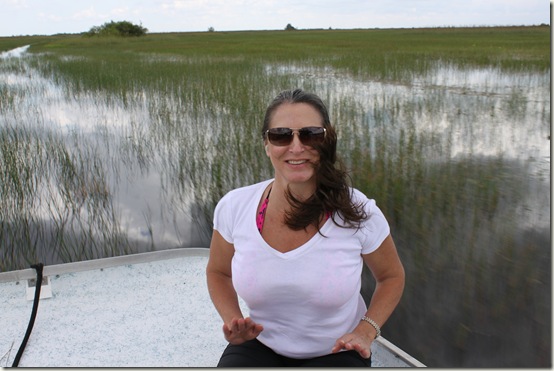 The fourth rule about airboat club is that if you bring your mom and she wears a bikini, *demand* that she keep her clothes on if she’s over forty.  See those hands?  She’s singing in her mind … (from the windows to the walls) get low, get low, get low.  Oh lawdie, she’s acting it out.  Maybe that should be a rule, too.  See that green back ground?  It’s called the river of grass for a reason. 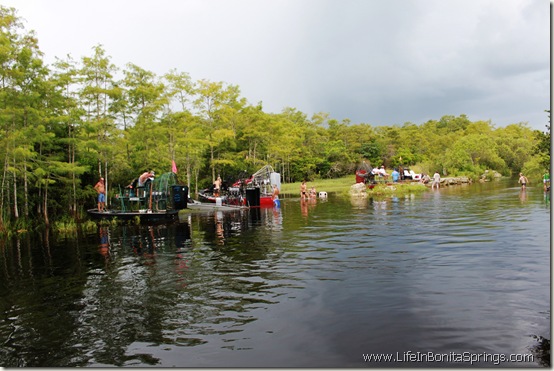 The fifth rule about airboat club is if there are other people at the swimming hole, revert to rule number four.

The sixth rule about airboat club is for the second boat in: Don’t fire up the grill while it’s on the boat.  Just sayin’.  That was a bad call.  <Steven Colbert wag of the finger!> 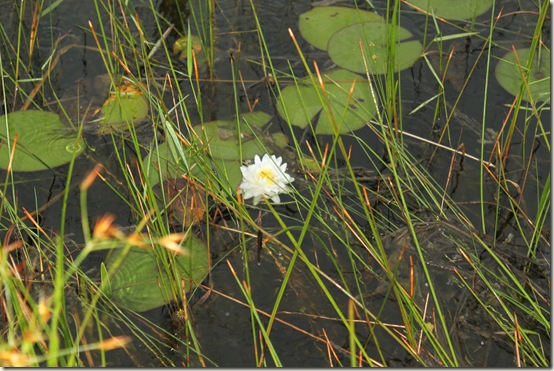 The seventh rule about airboat club is when it rains in the Everglades God makes it rain like he is punishing someone … big time.  See those lily and their pads under water?  An hour and a half through the worst, bucket dumping, lightening cracking, I want my mommy, storm that changed our lives we realized that the water level of the Everglades literally rose from below Lumberjacks knee to over it.

He was standing out there keeping the boat pointed in the least painful direction because there was sideways rain, little bitty sing-ging rain and rain that that felt like it was coming from the ground.  Homage to Forest Gump, since the boat is named Jenny (pronounced Jen-Nay like Forest Gump’s boat).

We were stationary because the rain was so heavy Lumberjack even couldn’t even to see to drive.  We were scared crazy with the lightening but declared that it was all worth it, would do it again and had fits of punch-drunk laughter, huddling like wet cats under some used Bimini top a few friends of his ribbed him for buying.  (Thank you for buying it, Lumberjack. You’re the MAN!) 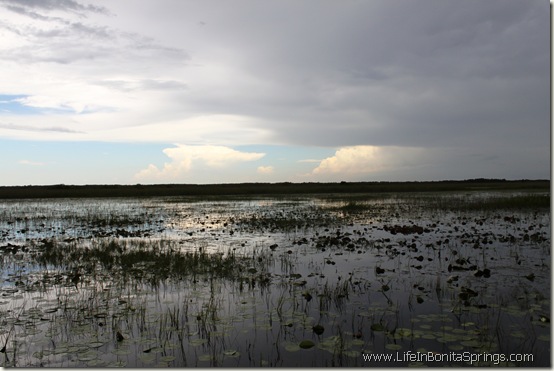 The eighth rule of airboat club is: This too shall pass.  We drove out of the storm, a little pruned, but we drove out and we saw why it rained so hard. 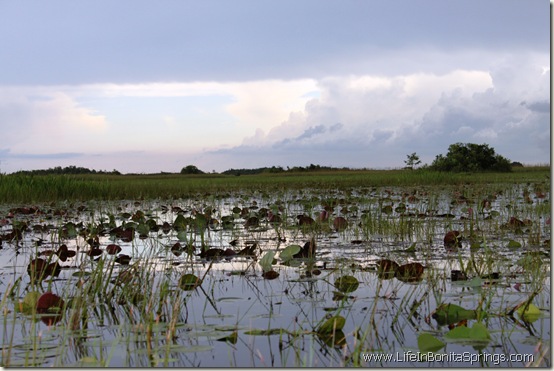 It’s because the under side of the plants need love, too.  Did you know that it flips the lily pads up when the water rises so fast?  Me either.  They’re burgundy colored underneath.  The whole area was crimson. 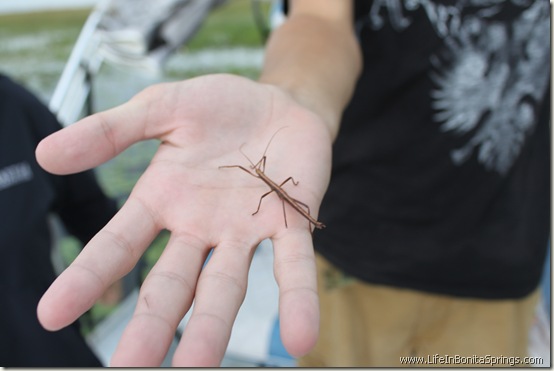 The ninth rule about airboat club is wear glasses so that a dragon fly doesn’t take out an eye and keep your mouth closed.  Lumberjack swerved to avoid a gator nest and went through some reeds or grass or something Evergladey.  When he got back on the path I heard someone say, there’s a stick bug on your mom. I was totally distracted with the praying – freeking - mantis on my leg to worry about the stick bug.  I was reminded, again, that whizzing in the boat was frowned upon.  What is it with this kid dousing me with bugs when I get in his boat?

Ryan, my hero, took that stick bug off my back, just before it climbed in my ear and ate my brains out.  Debra, Ryan’s mother, was somewhere in Australia within thirty seconds of seeing this creature within brain eating distance.   For the record, it only looks small in the picture because of the special, imported film that I’m using. 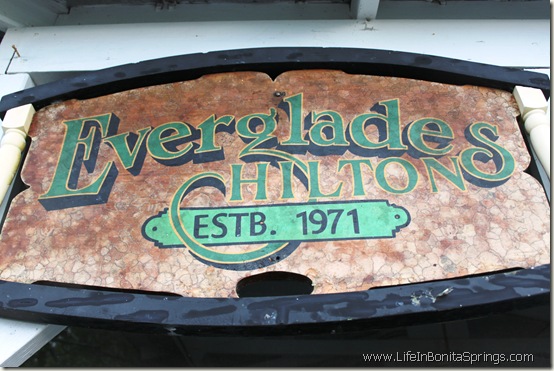 The tenth rule about airboat club is that people live in the Everglades and love the Everglades so be respectful – take only pictures, leave only boat wakes.  Plus, those people there might have a hut to hang out in if you make it there before the dookie hits the fan.  We didn’t make it to the “Hilton” before the storm if you didn’t catch that the first time I said it. This was the consolation prize, trip to the Everglades Hilton, which is really someone’s hunt camp. 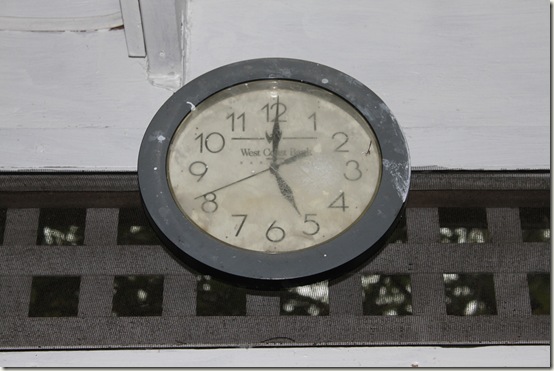 Taking a picture of a non-ticking clock stuck appropriately at five, so that it’s always five o’clock somewhere … at least when one is at the Everglades Hilton. 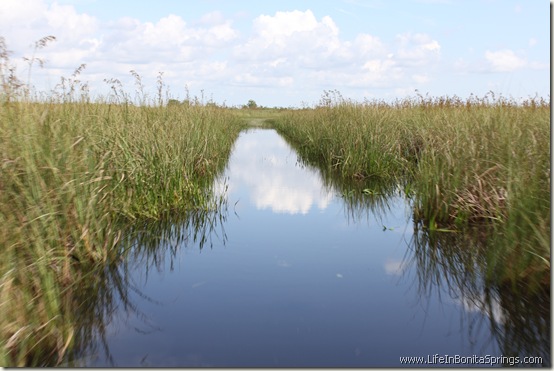 The eleventh rule of airboat club:  Obey the rules of the road in the Everglades.  I don’t know them but if you go out there, ask a local.   For the record, the whole bug incident happened right about here.  If you strain really hard you might see a praying mantis off to the left.  Tim, aka Hoke, said to me, “Next time you see a praying mantis catch it for my daughter.”  Yeah right, buddy.  Not enough cash in the world. 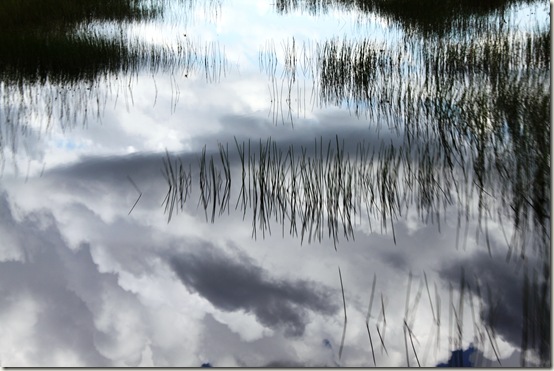 The twelfth rule about airboat club is that when the biblical storm passes you must be prepared to see a new beauty to the Earth that brings tears to your eyes.  Yes, you’re looking at the water.  Water so clean and so clear and so perfect that you can see the secret to life.  I think I heard giggling babies, smelled puppy breath, saw my grandparents who had passed on and forgot all about work for a few minutes, even.