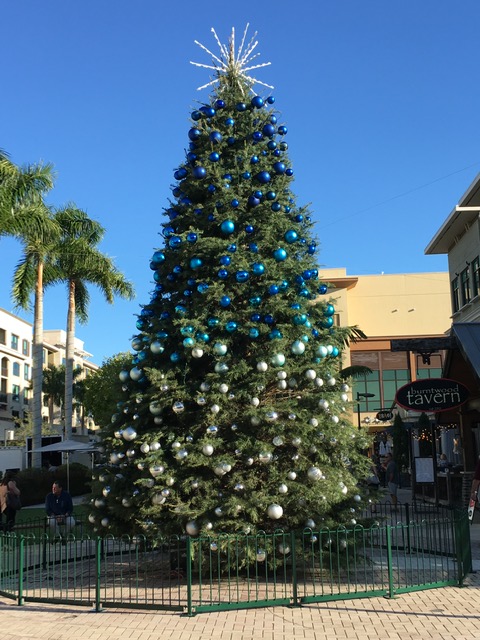 Tis the season to be jolly! Last night a group of friends and I went to see the Mercato Christmas Tree Lighting in Naples, Florida. This was our second year in a row, so we decided to go early and eat dinner first. We choose to try the TooJay’s Deli. It is a relatively new restaurant in Mercato and it was new to us. Since it was still early we got seated right away. When it was time to order, three of my friends ordered stuffed cabbage. The portions were so huge that everybody had to get a box to take some food home. Additionally, we ordered a tuna melt and I decided on the roasted vegetable wrap. Everybody was happy and enjoyed their food. After having a full belly, it was finally time to walk over to see the tree.

The Christmas tree was stunning even without the lights. In addition to the tree, Mercato had setup a stage. By the time we arrived a duo performed live music on stage. After the live music, we watched a group of young girls performing several dances. The atmosphere was magical! Numerous vendors were on the road and offered hot chocolate, coffee, teas, coupons, free tooth paste, floss, and tooth brushes, etc. Whole Foods had a booth and gave out samples of pomegranate cider, it was very delicious and not too sweet.

A lot of people were attending the tree lighting, so it was a great place to “people watch”. Usually, you could tell buy their clothes who was visiting Florida and who was living in Florida. Many visitors were wearing shorts and tea shirts and Floridians wore boots and jackets due to the temperature drop. It was a great time, everybody seemed to be happy. Channel 7 was at Mercato and was planning to go live for the Christmas Tree Lighting. Channel 7’s anchor, Krista Fogelsong, was on and off the stage to make announcements during the festivities. Earlier, she told us about the origination of the tree. We were told that the tree was specially cut down for the Mercato Christmas Tree Lighting and that it was brought down from Michigan. Krista explained further that the tree weighs 1000 pounds, and that it will be lit at 7:05pm.

Later on, we were told that we had to wait a little bit longer due to technical difficulties. And finally it was time. There was a loud countdown from ten to zero and the tree was lit! It was magnificent! After the tree was lit, several attendees tried to move close to the tree to take pictures in front of the tree. It was definitely a fun thing to do during the Christmas Season. I will go back next year. This is what Christmas is all about!

About the author.  Gisela Chamberlin is a Bonita Springs resident and an art enthusiast.