Grabbing the Short Sale Tiger by the Tail

Sometimes nobody wins in a short sale transaction. Face it, it is a tragedy. Sometimes a family's only option to sell a home is below the price of their current mortgage. It doesn't really matter why they are selling, it just matters that they're in the hole and it's going to be an ordeal to line up a qualified buyer, a seller in despair and a bank that, often times, doesn't cooperate. 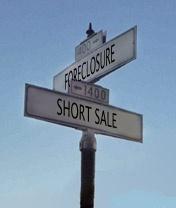 Take, for instance, a short sale that came on the market in the San Carlos area. San Carlos is about five miles north of Bonita Springs, barely into Fort Myers. The fixer upper home was listed at the entry level price of the market - $150,000. My buyer wrote a cash offer at $125,000 to close sale in 30 days. We're nine weeks into this short sale with no resolution. The bank has countered over list price originally but we were able to come to an agreement with regard to price. The settlement sheet was prepared, a date was set to close and the deal still didn't close because the bank wants the seller (psst who is in financial difficulty and loosing his home) to bring $3,000 to closing to cover some of the closing costs. Stick a fork in this deal, it's done. Meanwhile, about 20 other competing short sales came along and sat beside it on that park bench named despair. Three grand.

The bank involved with this property is following the picture perfect plan to ring in the next phase of a downturned real estate market. REO - Bank owned properties. This bank was a pig and now it will pay. The bank will eat more than three grand in holding costs, utilities, insurance, repairs, etc. trying to sell this warty toad over the following months. Heck, if and when that seller does move out or get foreclosed don't you think there is a possibility that they can do three grand worth of damage out of spite for losing their home?

So nobody wins in a short sale.

Honk your horn if you think this is out of control. This isn't an isolated incident. Every real estate agent that is working a short sale can tell you a whopper that even tops this.

If you're a buyer or seller of a short sale property you need to know that it isn't pretty, it isn't easy and if you're looking for a slam dunk deal, this isn't it. The list price doesn't determine the price a bank is willing to sell it at, it's just a starting point and it is not without hardship on everyone involved in the transaction.