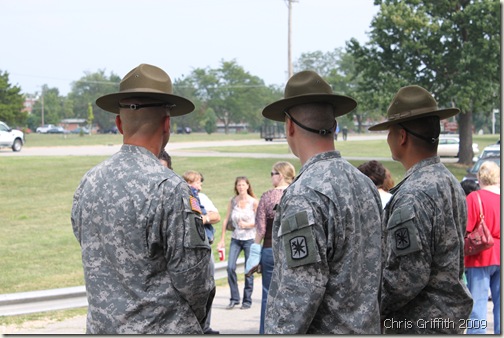 It only looks like they’re gawking and smiling at skirts.  I don’t think they were prepared for my style of stalkarazzi photography.  I’m a little worried that if they see that picture they’ll make me “drop and give ‘em twenty”.  I’m hoping that their “little to no sense of humor” act is just an act.  Hooah!

A week was taken off from work. It wasn’t a vacation, vacation but it was time away from Bonita Springs, real estate and even the weekly column for the paper.  Now, I’m back so pardon me while I take a brief departure from the typical Bonita Springs real estate postings. I wasn’t really planning on being so out of the loop but due to the isolation of the Ozarks and beyond, I had little to no internet access so it was a forced break.

Every once in a while I did read an email through my phone that read, “Where are you?” or “You’re never not online, what’s wrong?”  Everything is OK and I thank you concerned folks for asking.  I decided not to post as I drove across the country because, despite the fact that I have 14 ninjas also living in my house, there are a few troubled souls out there that didn’t need to know I was away.  You know who you are … start taking your pills as prescribed.

With little fanfare I left for Fort Leonard Wood, Missouri last week to see something I never thought I’d see in my life.  My youngest, 6-5, graduated from the Army and I just had to go see it with my own eyes.  He’s an MP now and jokingly referred to as super-cop.

The trip was met with a few detours for taking pictures and fits of sick, curiosity pit stops, too.  The first was Peppertown, Mississippi.  I had to eat and there happened to be a one restaurant in town. Look at what was at the “flea market” next door.  One man’s trash is another man’s treasure. 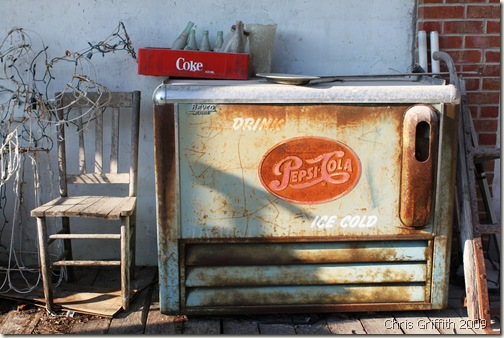 After Peppertown came Memphis.  I figured on my way to Missouri we should hook up with some friends, hit the best barbecue joints, find some good Blues and then look for Elvis … in no particular order.  Did I mention that it was miserably hot in Memphis?  It was, just ask LBD. 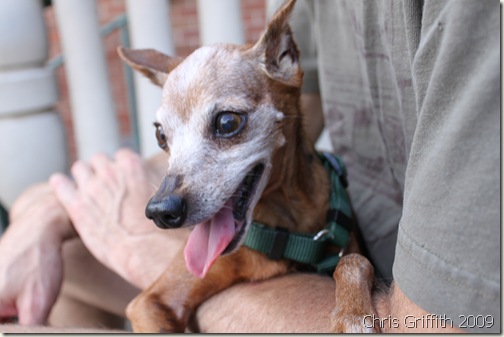 It was also historic and very pretty in Memphis.  We loved the city.  There were street cars, cobblestone streets and tons of things to see and do. 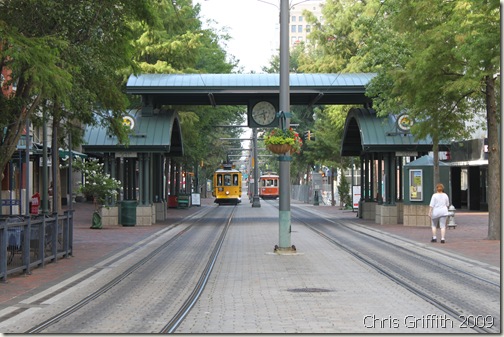 There was also an Elvis sighting.  He’s alive and well, drinking Starbucks and smoking Kool Cigarettes at the *same* time in on the corner of Peabody and Third in Downtown Memphis a few blocks from Beal Street.  If you were wondering, he could do a few sit ups.  The years of seclusion have not been kind to him.  I’m sure the cigarettes didn’t help, either. 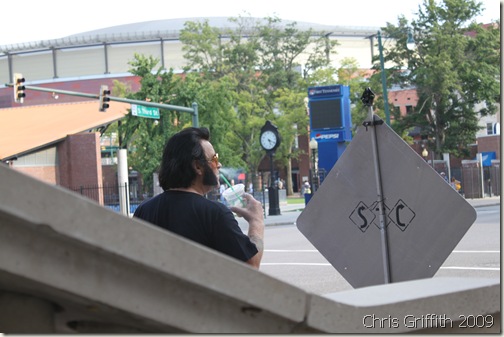 We also toured the river front park and took a break and watched barges go by on the Mighty Mississippi River.  LBD decided to get involved with a statue tribute to a riverboat crash.  Save … the … dog! 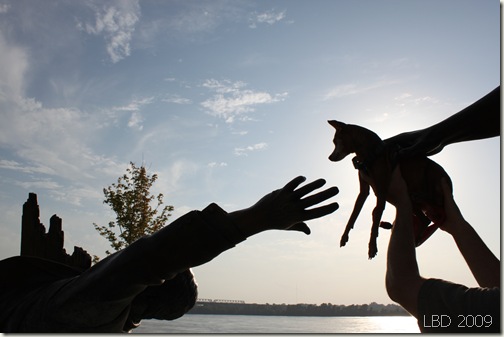 Graceland was on the list of things to do because we just had to see it.  We had already seen Elvis, which was great but I *had* to see how the man, the legend, lived.  It was the most glorious, over the top, tacky I could have imagined.  It was a riot.  Thank you, Elvis Aaron Presley, for just being you.  You were a pimp, dude! 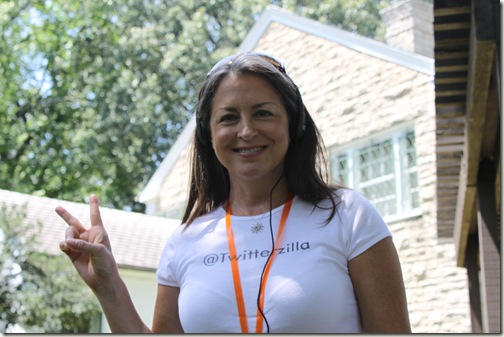 Twitterzilla’s in the hizzle at Graceland.  Did you know the “mansion” is on about 13 and a half acres?  Sweet real estate in the middle of the city.  He only paid $100,000 for the estate, back in the day.  The house would be considered a larger sized home in some Florida neighborhoods, not a mansion, by today’s standards.  It was a monster sized home back in the day. 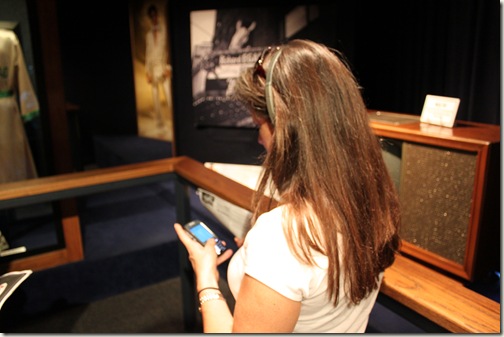 Twittering from Elvis’s House.  No wifi but lots of velvet, plus mirrored and carpeted ceilings. 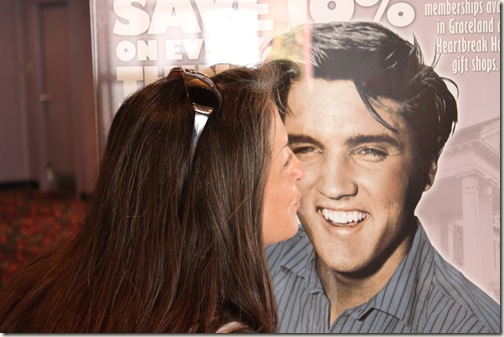 I lost a bet, had to kiss Elvis, and then got in the car to hit the bricks.  Instead I hit the pebbles, two to be exact.  The first one just put a chip in the glass the second one was surreal and made an impact.  Gah! I put a little pencil line on the cracks to see if they would spread. That was rather irrelevant moments later.  Yes, they spread.  I’m probably a funny person to watch stumble through life when it comes to things related to automobiles, especially wind shields. 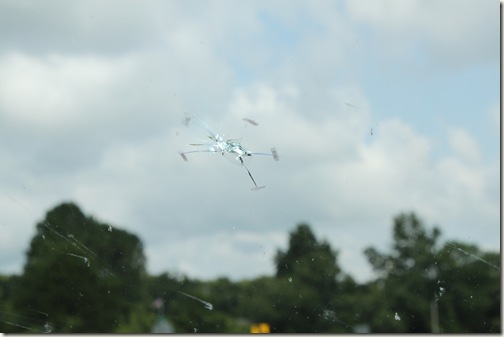 After Graceland and pebbles we moved onward and forward to the purpose of the trip.  6-5, who is of course, six foot, five inches tall graduated from the Army and it was really amazing to be a witness not only to the event but to see and meet so many soldiers and spend time on the base.

Thank you to the soldiers and veterans that have served our country. 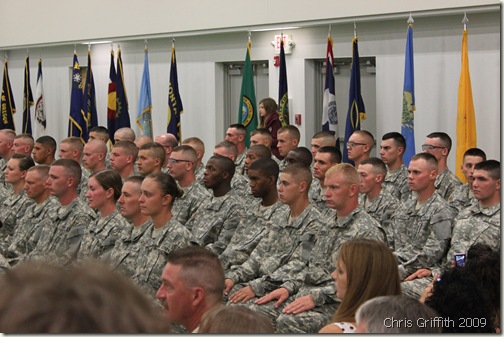 Look how young they are! 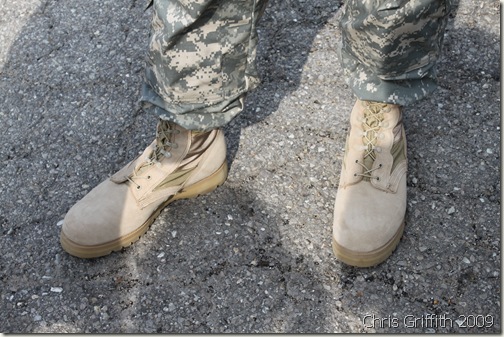 These Are Very Special Boots

We haven’t seen these feet for almost six  months.  These feet carried a body that has lost almost fifty pounds during that time.  The entire company lost over 1,700 lbs.  The drill sergeant wanted us all to know that they didn’t do it with Jenny Craig, Nutri-system or a low carb diet.  They have a great weight loss program in the military and all you have to do is sign up for it at the local recruiter’s office.

What do you give a graduate for a “graduating from the military” gift?  Maybe a four leaf clover found on base and laminated with clear packing tape found in the car because you’re momster a real estate agent and she rolls with gear, all kinds of gear and a pink knife. 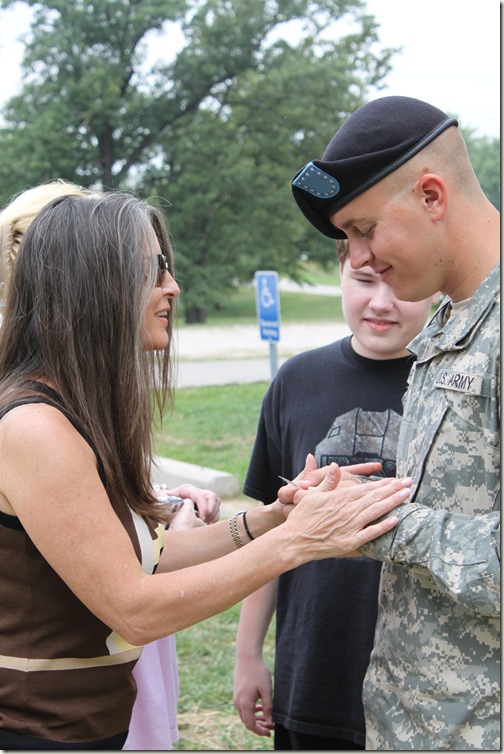 Commence Miss Clairol and Preference-because-I’m-worth-it, jokes.  Yes, I know the gray streak is wider, my mirror isn’t broken.  I’m using it to distract from the bingo wings and man hands.  Besides, this was one of the kids that helped put those white hairs up there so I’m milking it for all it’s worth. I’m not done working this angle, so I can’t cover it up, quite yet.

After the graduation we left the base we spent a few days in St. Louis just hanging around.   The Drury Hotel is super cool about dogs and  has rooms with a view of the Arch and within a 5 minute walk to the Arch Museum and the baseball stadium.  The Arch is a definite must see if you’re in the area.  The trip to the top is killer! 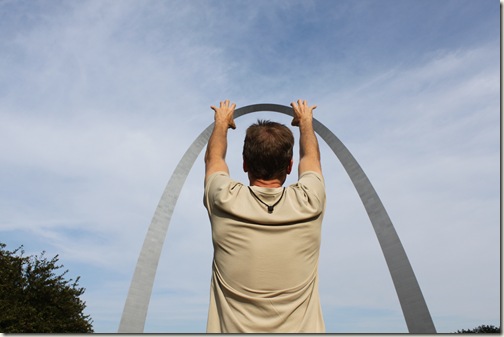 Thanks for catching up with my absentee report.