The Banyan Tree at Riverside Park in Old Bonita 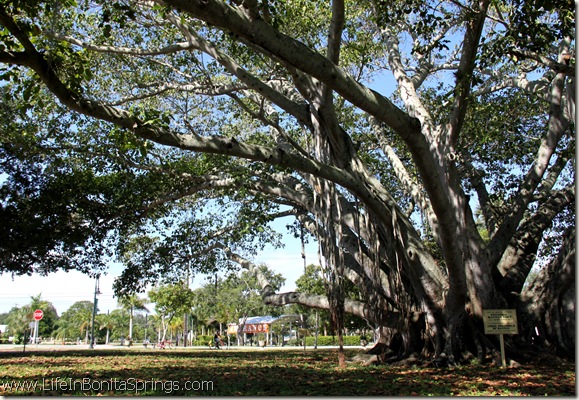 The Banyan Tree has been around since 1921.  It was planted when Bonita Springs had a boom to the area in the late 1920’s.  It’s been standing tall ever since.  It’s across the street from the Riverside Park Band Shell and beside the Bonita Springs Community Center.

The day I took this picture of the Banyan Tree I had met up with student nurses from FGCU who were helping Cafe of Life serve meals.  One of those nurses was my daughter who is almost twenty-three years old now.  I remember her climbing this banyan tree when she was very little.  Most kids remember climbing the Banyan Tree.  The picture doesn’t do justice to the enormity of it.

There is a long branch that points away in the picture.  It points out toward a covered seating area at Riverside Park.  I can tell you that the student nurse, when she was around five or six years old shinnied all the way out there.  It’s pretty far, pretty high and quite a feat.  What she wasn’t counting on when she got out there was a squirrel who was in panic mode, moving the opposite direction.

It was pretty funny and the squirrel would have run past her or under her on the bottom side of the branch but she panicked and jumped for her life.  Fortunately, I caught her because I’d been watching the whole thing.  That was probably the last day she climbed the Banyan Tree.  I should have made her face her fears after she was done with Cafe of Life.

If you’d like to see the Banyan Tree, it’s at the corner of Old 41 Road and Reynolds Street.  If you stop by on a Wednesday ask one of the Volunteers at Cafe of Life how you can get involved. They could always use an extra set of helping hands.