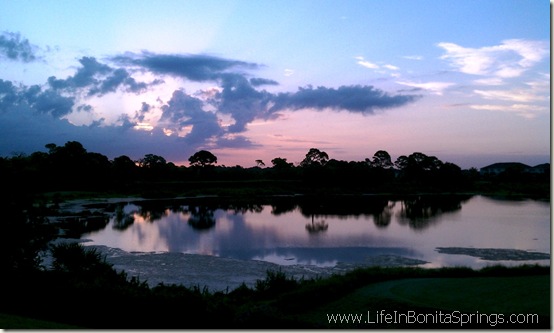 Just Another Sunrise in Bonita Bay

You know how you don’t know what a place is like until you drive around and see stuff, feel stuff, touch stuff?  Well, in a lot of gated communities that’s a challenge.  Take Bonita Bay, for example.  Bonita Bay is an absolutely beautiful gated community but because of the gates, access to passers by is limited.

Fortunately for you, I’m an imitation runner who wears a triathlon belt and there is just enough room for my phone in case I need to call a cab or an ambulance.  When I ran over the stone bridge in the back of Bonita Bay by the towers this morning the sun was coming up and it was just beautiful.  I took this picture with my phone because it was just so pretty.

This lake is right by the towers, the high rise condos in Bonita Bay.  The towers line the bay.  Everyone talks about the sunsets from towers … sweeping views and postcard perfect sunsets over the Gulf of Mexico.  What nobody mentions is that our sunrises are pretty spectacular, also.

If you think for a minute about the elevation I was at on the bridge, maybe at about the first or second floor of a tower by comparison and then imagine what it might have been like to be a little higher in the sky that day, I bet it would have been spectacular.

The people who live in the towers in Bonita Bay get to see these sunrises and awesome sunsets every day.  Can you imagine how fabulous that must be?

The Bonita Bay towers are priced in the high $400,000 to about $2.5 Million.  There are seven towers in Bonita Bay each offering their own special sunset and sunrises views.