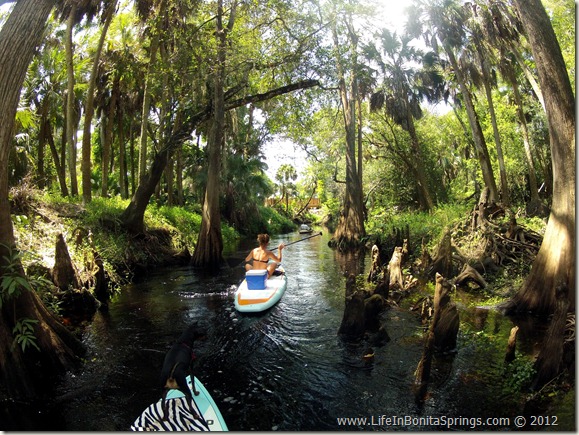 We decided to paddleboard the Imperial River on Labor Day 2012.  Our journey was going to be from Kent Road to US 41/Tamiami Trail.  I mostly wanted to do a run on the stretch that the Riverfest canoe race was going to be held on.

When we pulled up to the end of Kent we were met by Cullum Hasty and we told him we were preparing to do down river on SUP.  Within a few minutes he decided to grab his own kayak and join us for part of the Imperial River trip.

This eastern end of the Imperial River is well shaded and the water runs cool.  The banks are lined with cypress and cypress knee.  Every once in a while is a rustic looking swing or rope.  Periodic boat docs line the east end of the river starting just west of I-75 and grow in numbers as we  got closer to the Gulf of Mexico.  Gulf access real estate even though it’s east of Old 41 Road.  It’s great for fishermen, canoe or kayaking, too.

It was a phenomenal trip complete with wildlife sightings.  We even had home owners come to their back decks to chat us up and ask how our tip was going.  It was a good time. There’s a short video of the east end of the river if you’d like to follow along.  If you don’t see the video below, click here.

We hope you enjoy this trip paddleboarding down the Imperial River in Bonita Springs, Florida: