Sittin’ on the Dock of The Bay 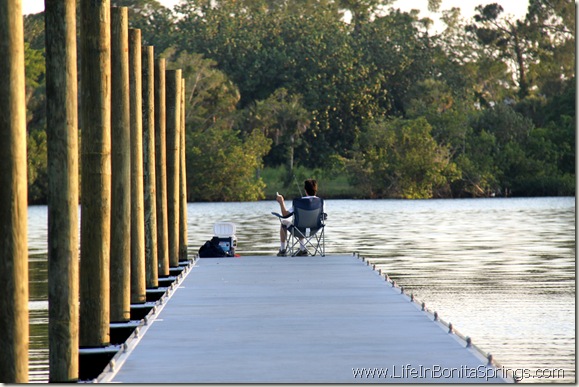 Sitting Quietly is Actually a Thing To Do

The great American pass time is sitting on the tush, usually in front of a television or computer.  We spend an awful lot of time indoors.  Too much time indoors, as a matter of fact.

Yesterday, I got a call from Marian from the Choir Project to discuss the ins and outs of all things nerdy that can be done to blogs and such.  She asked me why I hadn’t taken my camera out for a while.  I didn’t really have an explanation other than I just spend too much time in front of the computer, which is probably mostly the truth.

The rest of the rest of the truth is that May means Mother’s Day and my mother’s birthday is May sixteenth so I was positively uninspired for a couple of weeks. I haven’t felt like writing, picture taking or doing anything creative.

In an effort to try a little bit harder I first *found* my camera and second loaded up LBD and started driving … somewhere. I ended up at the newest park in Bonita Springs, River Park.   The park is pet friendly, but at this stage of LBD’s life he’s carried everywhere so he’s not like a regular, roaming, don’t-let-your-dog-poop-in-my-grass kind of dog anyway.

It would be a treat (for me) for him to crap in the grass.  I actually had my friend, The Fräulein, say this to me  today just as matter of fact as can be:

“Where is the little brown dog, I want to hold him … but he can’t poop on me, I’m on my way to school after this.”

The fact that it would be acceptable for him to crap on her any other time is probably just plain wrong.  (I’m thinking that is one of those “true friend” tests.)

At any rate, I ran the dog to the park. It was just he and I and a guy fishing on the new floating docks in the Imperial River.  It’ is so very pretty down there. I would have taken more pictures but having the geezer in tow is sort of like having a baby or a toddler. You can’t turn your back for a second because he’s blind, deaf, lame and ridiculous enough to walk the plank.

So, I took a few pictures but more importantly I took some time off, got outside and took advantage of the great park that literally thousands of people drive by every day. 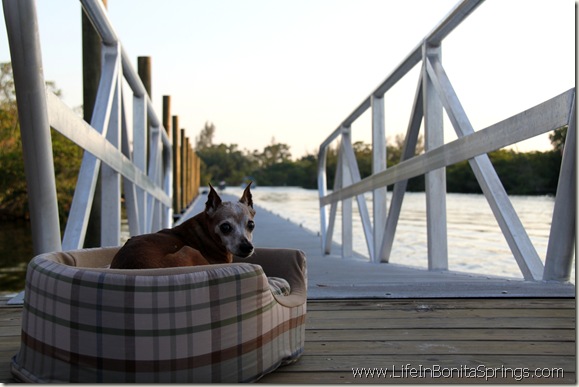