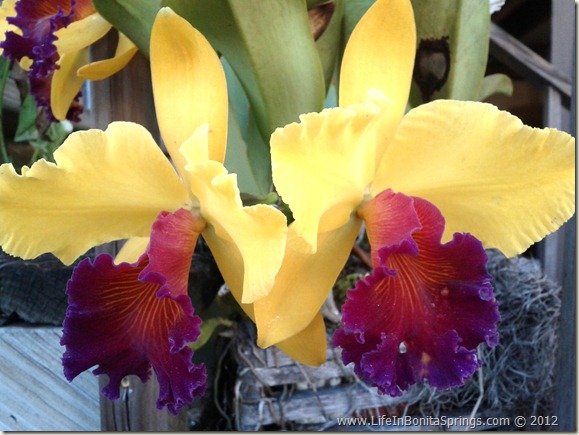 Nearly Every Bonita Springs Home Has an Orchid

This beautiful orchid is a hand me down flower. It hung in the front yard of my mother’s home back near the Bonita Springs Golf and Country Club for years. She got it as a hand me down orchid from a lady whose home I sold in San Remo at Palmira several years ago.  When the woman sold her home she just didn’t have room to take it when she moved up north and I found it left on the side of the house.  I made a call to the owner and she said to give it to someone who would enjoy it so I gave it to my mom.

In December of 2010 we sold her home.  My son helped pack up what was left of the items in the home and I asked him if he wanted the orchid on the front tree.  He loaded it up and hung it under his home just a few miles away in the state streets.  It probably wasn’t be a few weeks later that he called me to say, “You’re not gonna believe this but that the orchid has bloomed”. I was away at the time so he put the pictures on Facebook.

Today, I was over at the house and the orchid is in full bloom again. This is the third time.  All these years it took for a bloom … talk about a late bloomer.  I called Judy’s daughter, the original owner of the orchid, and let her know.  It seems like everyone has always waited for this orchid to bloom.  I think it was patiently waiting for just the right owner.