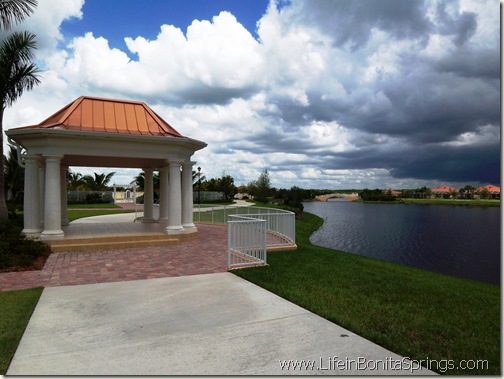 Updated July 2010 – Rail Head Cafe is now in Village Walk and open to the general public.  Why not dine in a club atmosphere in a gorgeous community?  Village Walk is located off of Bonita Beach Road, East of I-75.

In case you’re wondering, Rail Head still makes everything from scratch and is reasonably priced, too.  If you’re not a resident of Village Walk call ahead to have your name given to security at the gate so you’ll get in easily.  239-221-7093

Just last week I had an opportunity to dine at Rail Head Cafe in Village Walk.  The Arizona Wrap was actually improved, they toasted the wrap first and it made it even tastier.  The original review of the restaurant is below the new, improved map to Village Walk and The Rail Head Cafe. 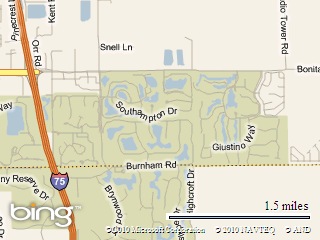 Recently when “my” Albertson’s Grocery store closed I was not only saddened but left without a local, handy grocery store. Today, I swooped into the Albertson’s on the corner of Bonita Beach Road and Livingston Road to pick up some shrimp to make stir fry with “Japanese Secret Sauce”.

FYI: It turns out that that “Japanese Secret Sauce” that gets major play at the steakhouses and franchises, isn’t really all that “traditional”. Email me directly for the “top secret mayonnaise based recipe”….and the clever story how I lost my vision by getting the secret ingredient in my eye accidentally. Seriously, I wouldn’t believe it myself unless I was the one with black, drippy, mascara running down my face.

This wasn’t the first time I visited this plaza where my “new” grocery store is. I’ve been making a nuisance of myself at the Railhead Café. Rail Head has only been in this plaza for a few short weeks. Back in the day they were in Rail Head Park, hence the name Rail Head.

Several weeks ago, long after “my” Albertson’s closed I had to go to “the other” Albertson’s. I saw Rail Head Café was there and decided to try something new.

My first trial was with @AlGorithm and he had a blackened chicken sammy and I had a breakfast burrito; egg with *home made* salsa in a wrap. I’m not wild about eggs and hadn’t befriended/blackmailed the staff to special order stuff for me yet, so I made do and lived to tell the tale.

Since then I’ve been a tough customer. I’m a picky Patty I asked for the Arizona wrap (which traditionally comes with turkey) with no meat. It has all sorts of veggies, avocado, maybe a chipotle mayo and a few other fixin’s.

It’s affordable to dine, per person at $7 or less and it’s all home cooked, as in home made. Tasty sides of pasta, slaw, fries, what have you. First time I was in with a friend the tab was $11 for two. You can’t beat that value with a stick.