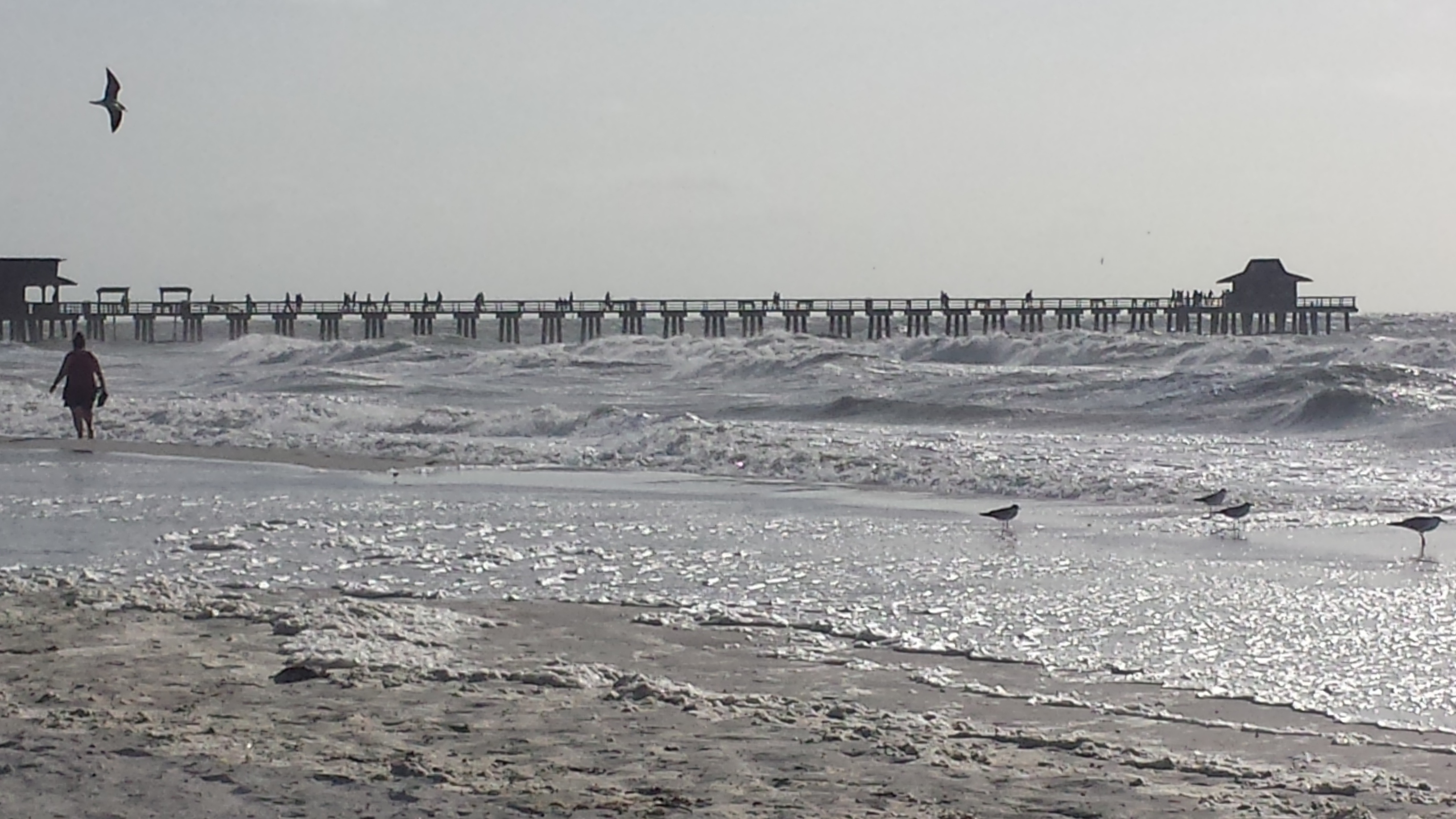 The first thing I’m going to mention about the Naples Pier is that if you are in or on the water, you need to stay 100 feet away from it. I mention, because I’ve been told more than once to keep my kayak that distance away by the nice lady in the official looking uniform. It’s obviously a reasonable safety precaution; however, like all of the fish that are drawn to congregate underneath its supporting pylons, it is a natural attraction to be drawn towards.

Like the fish that congregate underneath the pier, their terrestrial counterparts are drawn to it for probably the same kind of reasons: people watching, dolphin watching, fish watching, bird watching, and whatever else might be drawn to the attraction. It’s a place to congregate.

When I first started visiting Naples, I would grab a book and towel, and go down to the pier to suntan, read, and people watch. I’s a fun and low cost for those looking for things to do in Naples. There are two volleyball nets set up just south of there and so I’d often play volleyball with whoever needed a player. Over the years, things have changed, and now they also have a stand with free honour system life jackets for kids, available.

There is a concession stand about halfway out to the end of the pier that serves up hot dogs, hamburgers, pizza slices and drinks. There is also a roofed area with a few picnic tables to sit and eat in the shade. There’s also fish cleaning tables with running water if you’re lucky enough to catch a keeper while fishing.

There are bathrooms and showers as you enter the pier from the cul-de-sac that serves as a drop off point for people with serious beach gear: beach umbrellas, coolers, beach chairs, and so on.

There is paid parking one block East, or if you are a Collier County resident, you can park for free, (I think; there has been discussion about charging a fee for residents, and given the history that I’ve witnessed, if the County can find a way to squeeze some coin out of Paradise, they eventually will). I haven’t used it, but I believe you can receive text messages when your time is running out, and add time to your parking spot via a phone app.

The best time to go? When isn’t the best time to go to the beach in Naples, Florida? When there are full moon sets, (usually in the mornings, in this part of the world), or if there are distant offshore summer lightning storms, (again, in the mornings; the summer afternoon lightning storms here are terrify). I’ve lived here long enough that I would say the two times I would avoid the Pier are during the New Years and Fourth of July fireworks, and that has more to do with traffic than with the experience. I enjoy the fireworks and the crowds of people well enough but it is a traffic jam trying to get out of town after. If I go nowadays, I park my pick up around Tin City, and bicycle the rest of the way to the beach.

Sunsets. I almost forgot to mention sunsets. This is one of the best times to go when you get to the age where lying on a towel in the sand soaking up rays is not as much of a to-do list item any more. This isn’t really specific to the pier, but a lot of people like to go to the beach to watch the sunsets. Again, especially in season, parking can be an issue, so if I want to watch a sunset, I usually plan to be parked an hour before the sunset, because I’ve seen cars parked a block and a half away by people hoping to catch a green flash sunset. I usually bring my guitar, and go stake out a spot on one of the benches. Usually the benches also fill up pretty quickly, as sunset approaches, and people generally engage in friendly neighbourly chat, sip wine, and oooh and ahhh over the sunsets. P.S. it’s probably not exactly legal to sip wine on the beach, just as an FYI.

As for the particular subcategory of green flash sunsets, I have probably witnessed over a dozen of them, and have yet to capture one on camera. That’s probably a subject for a digital photography article. But they are unique, and people generally are pretty excited to witness them.