Manners 2.0 is There an App For That? 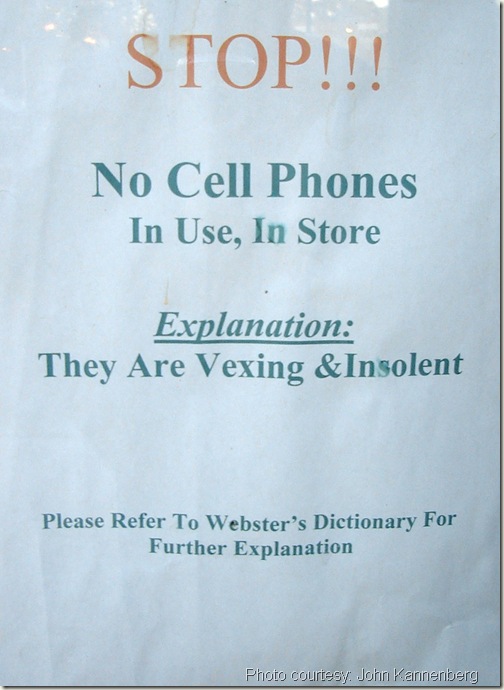 Hang Up and Drive – Shut Up and Eat

Remember when cell phones fist came out? I’m old enough to remember cell phones with a battery pack, suit case thing with a corded receiver. There really was no discrete way to walk around on a cell phone, back in the day, because it was work to look cool with a mobile phone.

Flash forward a few decades and just about everyone is walking around with a phone or a blue tooth perched on their ear; in traffic, in the elevator, at the store, everywhere. Lost? Need something? There’s an app for that.

I popped into the grocery the other day. At check out I was third in a line being led by a young woman. The man in front of me was thoroughly over the situation of the woman in front of us holding up the line because she was talking on the phone instead of taking care of business.

It occurred to me that this woman, who I’d estimate to be in her early twenties, probably doesn’t know any different. While it’s not my job to make excuses for her or educate her, she did grow up with cell phones, computers and a lot of the modern conveniences that we all depend upon. This woman didn’t know or care about phone manners.

The last few decades have brought changes at the speed of light where technology is concerned. Everyone’s lives are far different than anyone could have ever imagined. Unfortunately, the technology has grown faster than the rules and manners for using it.

Maybe it just needs to be said so I’ll just say it. It’s not OK to check out at a grocery store and be on a cell phone. It’s rude. It’s no different than turning your back and having a conversation with another person and ignoring what’s going on.

You’re supposed to be engaged in a transaction with the clerk that’s trying to tell you your credit card is maxed out, not on your phone telling Tiffany about the great shoes you got at DSW.

Anywhere you’re in queue, with exception to waiting to get on a roller coaster, you should probably not be on the phone. Besides retail stores, that includes the post office and department of motor vehicles. The exceptions are calling 911, someone’s in labor or a perfect match for a kidney has been found.

Maybe it should also be mentioned that phones ringing in restaurants shouldn’t be the norm, either. While some of patrons could be fans of Taylor Swift they’d prefer not to hear her ring tone it in the middle of dinner. The “I didn’t know my phone was going to ring, fumble for it in my purse or pocket show” doesn’t make it less rude, either.

It’s a phone and it rings at unexpected times. It also vibrates, so maybe that feature should be explored. Short of that whole labor, waiting for a kidney thing does one really need the volume that high or even at all?

We use our phones for everything and there’s an App for nearly everything but is it appropriate to use them when we should be interacting with others in person?

Out of curiosity I searched to see if there were any phone apps for etiquette or manners and there weren’t any. How’s that for irony?