Everyone knows that I hate combo boxes. My theory is that the agent who uses them, most of the time, is too cheap to invest in the supra box, the box that digitally tracks everyone who actually enters the residence for sale. My second big dislike is when the listing agent hangs the box in a location that is tough to get to.  For example, it has been my experience that when a lockbox is hung in the bushes or a hose bib around the corner, the listing agent is often times a man.  Trust me, I have paid particular attention and can share that, since I have done this a  looong time, there are certain agents I just know are going to put it somewhere that Louis and Clark could only find.

In the off chance that a real estate listing agent who does this reads this post, women wear nice shoes.  Men probably do, too, but women where nice shoes.  They often have pointy heals that don’t do well in grass.  They also can’t take water intrusion if the sprinklers were on or it had just rained.  Quit trying to ruin my shoes. I don’t skimp on shoe expenses. Quit hanging the lock boxes in non-paved areas.  Women, and probably men, don’t like reaching through weeds or bushes (where snakes hide) to get to the lock box.  That’s just self explanatory.

A while ago I was showing property as a buyer’s agent and the lockbox was said to be on the railing of the condo for sale.  It turned out to be true.  It was both visible and reachable from the concrete sidewalk.  I accessed the box, popped out the key carriage and after I pulled the key out the carriage and accidentally dropped it.  Unbeknownst to me at the time, was the animal hole below the supra box.  Yes, the key box carriage plummeted to the bowels of hell. I could barely see it with my cell phone flash light. 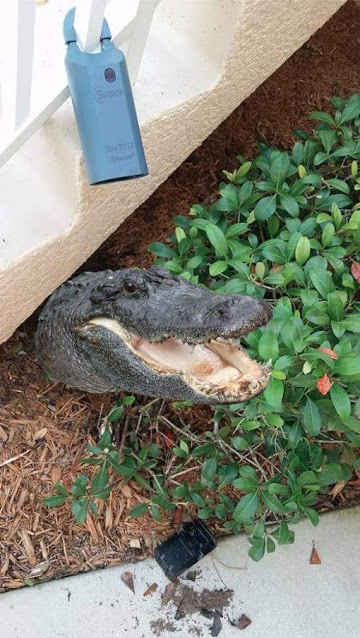 It was a long detail to retrieve it with broom handles and salad grabbers that I had retrieved from the condo. Just so you know, they say snakes live in animals and turtle burrows here so I could have died.

It took seventeen years to find myself in that predicament but I won’t ever forget it.  I probably won’t forget those awful clients, either.  I don't get them often but those two were horrible enough to be erased from my database.  The key box to the bowels of hell should have been the sign!

Recently, I came across the photo I took of the whole situation. A photoshop experienced friend  who also sells Des Moines real estate borrowed the image and added a few elements to reflect the real danger I was could have been in.

Here’s to all the good days I’ve had showing property in Bonita Springs, Florida to the great customers and clients who made me forget about those terrible, tacky people on animal hole showing day.