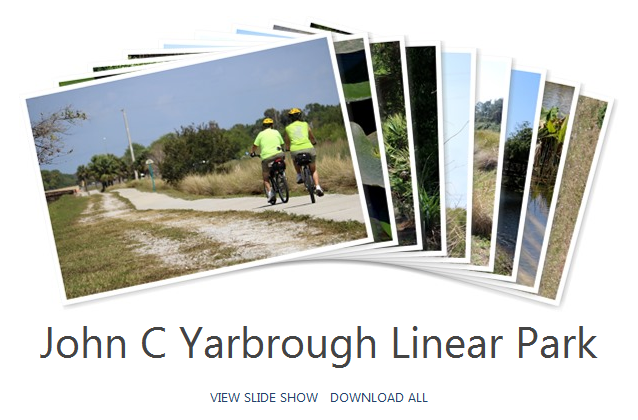 Several years ago I enjoyed my first trip to the linear park with a local running club. With age, they say, comes wisdom plus my joints have let me know that running is no longer in my wheelhouse. To that end, I have transitioned to a variety of low impact sports one of which now includes bike riding. A couple of bikes fresh out of Engle’s bike shop and a new bike rack for the Mini Cooper later I found myself at John C. Yarbrough Linear Park for the first time in years.

For those who don’t know, the Linear Park basically is a paved path which runs along the 10 Mile Canal in Fort Myers. The linear park itself is about six miles in length. The city of Fort Myers did a great job transforming a narrow water run-off into a nature preserve for all species, including humans, to enjoy.

My first linear park bike excursion began at Six Mile Cypress Parkway near Sun Harvest Citrus, headed north. It’s a partly shaded and very scenic trip through a lane of native Florida trees which eventually opens up to a wide spans of both path and canal. The asphalt bike path is rather wide so there is plenty of room to ride side by side with a friend or for oncoming or, in my case, overtaking bikes to pass.

Subsequent trips to the park began at Daniels Parkway, heading north, specifically to avoid the white knuckle crossing at Daniels parkway. There is a safety crosswalk but if you’re thinking of taking kids with you I would recommend the path north of Daniels to avoid crossing against heavy traffic. The other intersecting streets of Crystal Drive and Danly Drive are low traffic and easier to cross.

Along the way, the bike path crosses the canal via rustic metal bridges in several locations. The bridges offer a bird’s eye view of the waterway and the perfect vantage point to see cichlid fish building nests to spawn. It’s also not uncommon to see a wide variety of birds frequently spotted in many southwest Florida swamps and marshes such as gallinule, cormorant, anhinga, coot, cranes and egrets. Nature photographers can easily capture closer than usual subjects here, too.

The linear park is always busy with a variety of walkers, cyclists and dog walkers. You may even run across a stroller or two with dog on board instead of a child. The path is about twelve miles round trip but there are plenty of places to take a break on a bench or to grab lunch at a picnic table situated along the trail.

When you go, keep in mind that there are no rest room facilities and what you pack in, you also pack out. For those who are considering bringing the dog, the linear park is an on-lead, dog-friendly park.

The official parking areas listed on the parks department website are located at Six Mile Cypress Slough, Lakes Park and Lee County Sports Complex all of which are quite a distance. I will share that there are unofficial, large areas of unpaved parking both at the Six Mile Cypress Parkway and Daniels Parkway entrances which are certainly more convenient.

You can find more info at www.traillink.com.