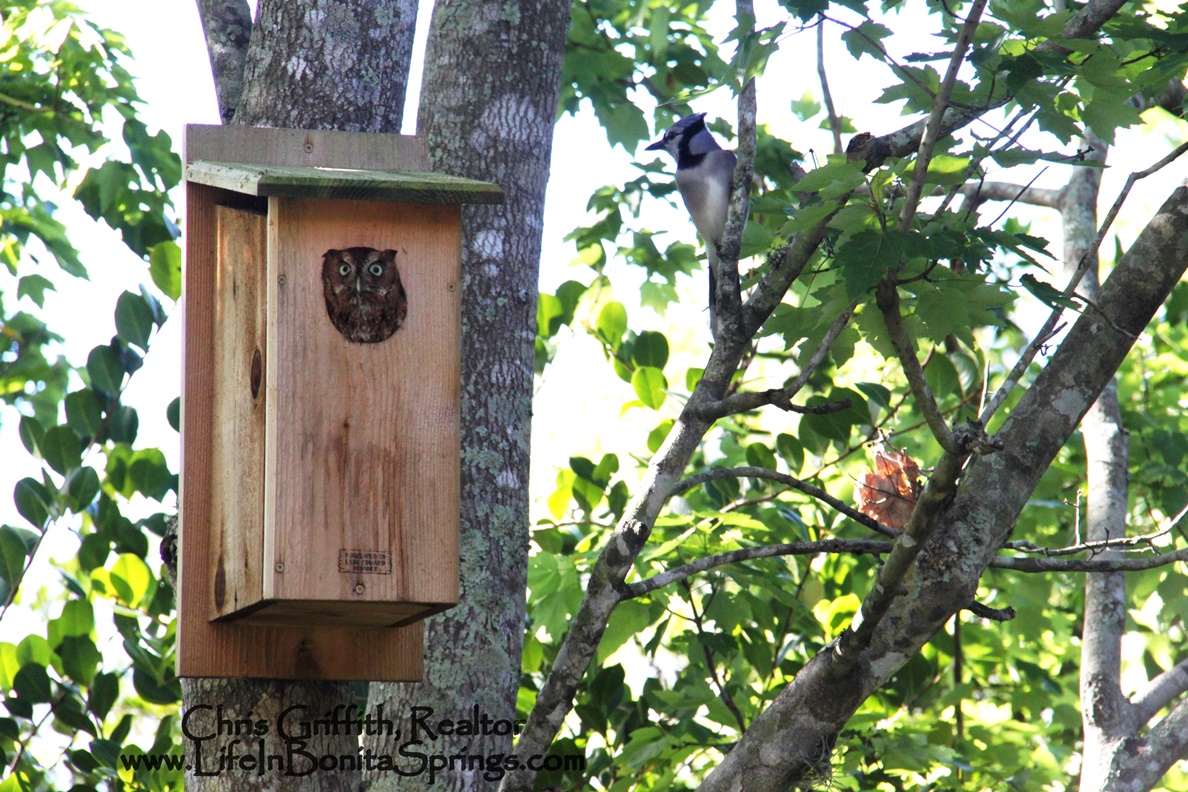 For those who doubt, there really are four seasons in Southwest Florida. They’re just not as obvious as up north. Down here we have spring, summer, fall and the fourth season is whither, not winter. My back yard, which is on a tiny preserve, is leafless and sorry looking for a couple of months over whither.  There are actually maple trees and the leaves turn and fall but that all sort of happens on one day.  We have fall but down here it’s speed-fall.  We also have speed-spring. Those same maple trees decide to grow leaves over night. This year I think it was on January 9th. I woke up and, boom, the trees had leaves.

Spring has sprung and it’s not just the trees. After a Blue Jay ruckus in the back yard I went out to see if it was caused by the usual suspect, a resident red shouldered hawk. I had to do a double take when I saw a baby owl staring back at me from the screech owl box that one of the cawing Jays was beside.  Finally.  It had been a year of staring at a cedar box watching the proverbial pot not come to a boil.

This owl box was silent auction winnings from the 2013 CREW fundraiser at Riverside Park in Downtown Bonita Springs.  The 2014 fundraiser is March 1st, by the way.  I took my prize home, researched the best location and way to install it and then waited until birds moved it.  Apparently, I should have written “owls only” by the opening in the box.  Much to my surprise the birds that moved in weren’t owls but butterfly eating Crested Fly Catchers.  If you haven’t caught the irony … I raise butterflies for sport in the same back yard as the owl box.  I had been end gamed by Mother Nature.

Fortunately, the Fly Catcher eggs hatched and the murderers were on their way shortly thereafter. The owl/flycatcher box sat empty for some time, nearly a year until recently. I’m a grandma, again. We officially have owls and I’ve named the mother Olivia.

So here’s what I can share.  The owls have actually been in the back yard far longer than I realized.  I’ve heard their call at night. You can go to www.AllAboutBirds.org to hear several recordings of their call.  I also know that you can get your own owl box or other native bird box, handmade in the US of A by Brian Beckner who made my owl box.  Learn more: www.facebook.com/NativeBirdBoxes

Even a city owl needs a home so don’t think that you’re in too noisy of an area to encourage wildlife in your own back yard.  I’m just off of Tamiami Trail with a little bit of woods in the back yard. I’ve seen so much wildlife as soon as I started giving the critters a reason to come around and after I started paying attention to the little details and clues they leave behind.

One of the biggest benefits so far is a reduced rodent population, something I am certainly comfortable living with less of around here.

*This article was written by Chris Griffith, special to Southwest Spotlight Newspaper*