Hands Across The Sand at Bonita Beach, Florida 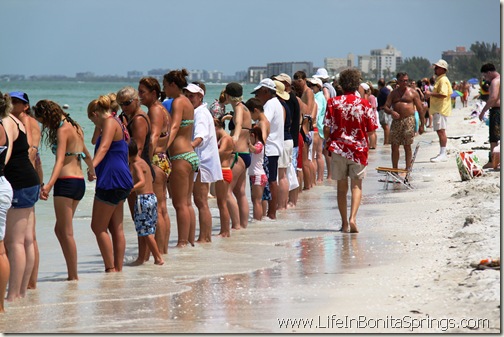 This Was an Awareness Rally - We Have No Oil

Folks I took tons of pictures and I just need to decide if I want to waste the storage space on them.  Lucky for you I mostly took pictures of other photographers covering the event and tramp stamps.

For the most part, there were tons of photographers and the outnumbered the attendees in the beginning.  It was rather humorous so the hunters became the prey and I got ‘em all.  Then I turned on the ink.

I don’t know what it is about tramp stamps but it’s like flashing ambulance lights at an intersection beside a pile of crumbled up cars. You don’t want to look, but you can’t stop looking.

So where most people might wonder who caused the accident and if the drivers were texting or impaired, I wonder the same thing about the tramp stamp.  Did you lose a bet?  How drunk were you?  I did you ever imagine you’d have a dimpled, saggy butt with muffin tops and that would be it’s crown?  Did it look that freeking huge in the book you picked it out of?  How much ink did it take?  Are you sure it says what you think is says … I mean, it’s Chinese and all…

Anywho, there was a rally at Bonita Beach today to bring awareness to the offshore drilling and to promote alternative sources of energy.

On my exit I noticed the parking lot was full to capacity with gas powered automobiles and there were only five bikes in the bike rack.