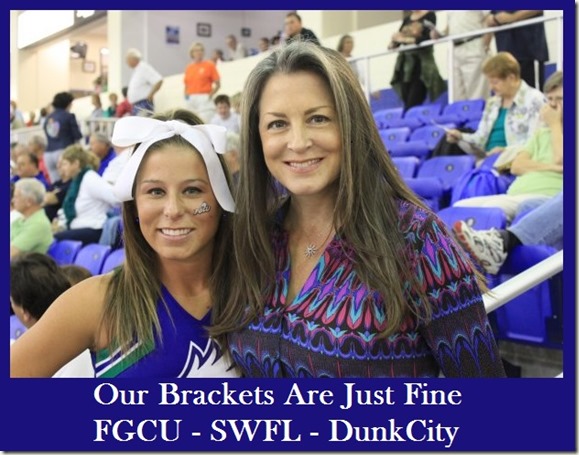 Florida Gulf Coast University - Long before all the sweet 16 hoopla, many people in Southwest Florida were fans of FGCU athletics.  We look at the last few recent wins as rewards for loyalty and just plain fun to watch.

The night that FGCU defeated Georgetown I happened to be in the area of Miller’s Ale House and the (now alumni) cheerleader in the picture above invited me to stop in for the last few minutes of the game. The crowd inside was on fire.  The chanting shook the building. It felt like the center of the universe and the fountain of youth all wrapped in one.  I even snapped a few pictures of FGCU fans and took a video of the enthusiasm.  Watch it here: FGCU Basketball Win

It was unbelievable watching the next FGCU playoff game. I actually gave play by play of the entire game, via text message, to the, now, FGCU nursing school graduate who was at work and not at all happy about missing the game. She had cheered this team on for four straight years as the flyer, ending up on all the advertising as a representative of the school.  There was cheering in her texts back to me, mixed with aa slough of OMG! OMGGGG!  Oh em gee!

Tonight is the next big game in Texas against Florida.  Lots of loyalties are being divided in Florida but the end result, no matter what, is that FGCU is a winner.  A winning team, a winning college and it’s all going to translate into a win for southwest Florida and the local economy, the real estate and the businesses in the heart of Dunk City, USA.  Things are forever changed in Southwest Florida and the suburbs around the school; Bonita Springs, Estero, Fort Myers, Florida.

This school has been a growing boon to the area but this championship has lit a fire under the growth and very bright future of the school.  This win has put the school on the map and a few things huge things are going to happen very quickly.

There will be a wave of applications and inquiries to the school.  Those who had FCGU as a 2nd or 3rd choice are bumping it up to number 1. Those students looking to attend FGCU are going to be touring the campus.  From the moment a plane touches down at Southwest Florida International Airport the cash register is going to start ringing. Local hotels and restaurants make out big time with visitors from the area specifically visiting FGCU.  This isn’t even including FGCU new student orientation days which are just overwhelming.

Every year the new students of FGCU bring a wave of new purchases of just about anything they need to set up housekeeping in Southwest Florida.  They rent homes and condos, they buy household goods, purchase food, use goods and services, you  name it.

There are affordable real estate deals out there and inventory is being absorbed at an stunning rate.  Holding real estate for four years during a revitalizing real estate market upswing is going to prove a great investment. On top of that, think of the demographic of a real estate buyer putting a student in a home to attend the university.  They’re in that boomer demographic, a few years off from retirement.

There aren’t many places better to retire in southwest Florida … think weather and if that doesn’t tickle your fancy, think no state income tax and other tax benefits for moving to Bonita Springs, Florida.  Plus, if parents of students attending FGCU are looking for a reason to move to Florida for a permanent residence they look at some of the luxury communities near campus.  Considering that Bonita Springs is about 65% gated and deed restricted, it’s the perfect place to purchase luxury real estate.

This economic ripple will go on for a while.  The school will have new student candidates calling, the luxury of cherry picking academic superstar students and superb student athletes plus, lest we forget, the influx of money in the form of donations from corporate benefactors and alumni alike.  Everyone loves a winner and there is nothing like a Cinderella story to loosen purse strings.  I would suspect that FGCU will have a banner year for donations by the alumni.

For now, we’ll kick back and enjoy the hoopla, the media coverage all over town and the team spirit that has consumed us all.  It’s a fun time to be in southwest Florida.  Here’s to our team, southwest Florida’s team, America’s team.  You’ve been a blast to watch.  Go Eagles! #DunkCity #FGCU