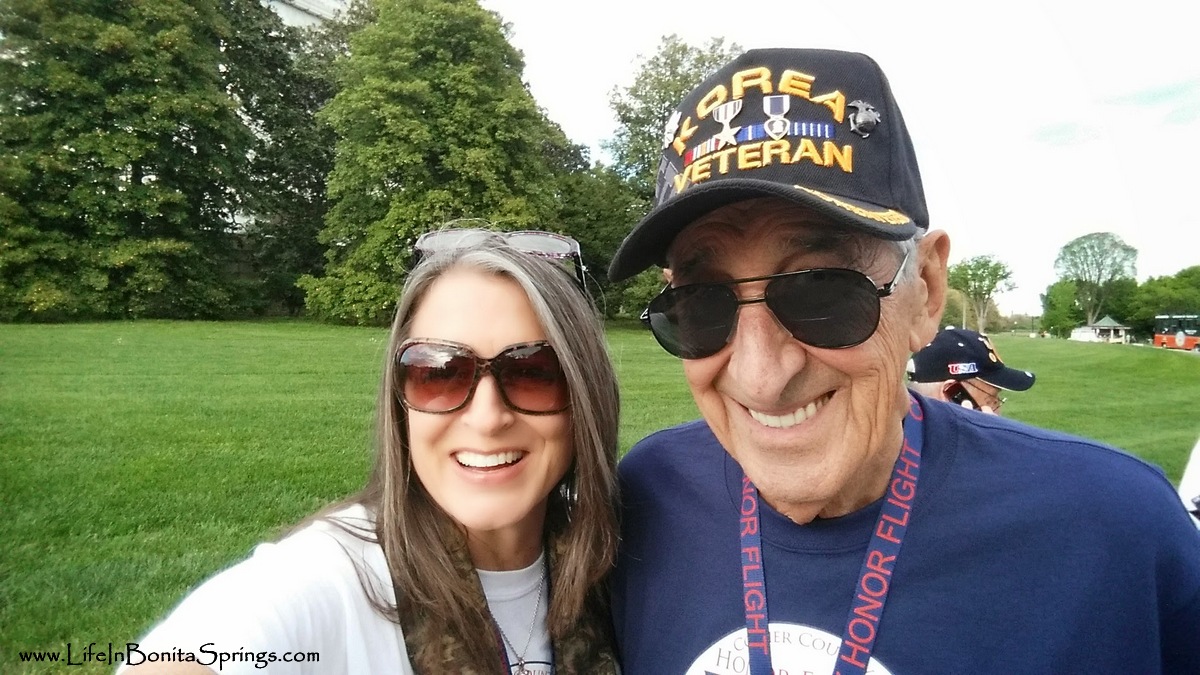 Several months ago I applied to become a guardian for Collier County Honor Flight. If you are not familiar, honor flight is program which honors America’s veterans for their sacrifices by transporting them to Washington, D.C. to visit and reflect at their memorials. My phone rang on a random Thursday in April and I was asked if I had continued interest in going and if I had a particular set of dates available for orientation, training and for the actual flight. After a quick glimpse of the calendar, I was in and paired with my very own veteran, Theodore “Ted” Adams, who I had the good fortune of accompanying to Washington DC. 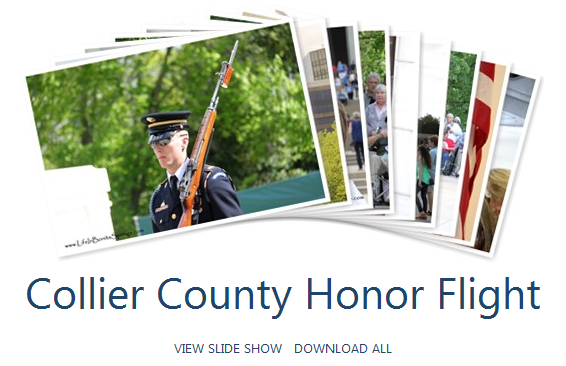 Ted served in the Marines (1950-1954) and was decorated with the Silver Star, Bronze Star, Purple Heart, Korean Service Medal and Presidential Unit Citation. I learned that at eighty-six years he was the youngest veteran on the flight and one of only three veterans of the Korean War on the flight; the rest of the veterans had served during World War II. One of the WWII Veterans in attendance had celebrated his 101st birthday, just days before!

Everyone gathers at the airport pre-dawn on the day of Honor Flight because there is so much to squeeze into one single day. The mission begins at dark o’clock and returns back to southwest Florida fairly late in the evening. Squeezed into the middle, without a moment to spare, are police escorts from memorial to memorial. It’s quite remarkable to witness the whole operation in motion.

The points of interest we toured included the World War II Memorial, Arlington National Cemetery to witness the changing of the guard, the Korean War Memorial, The Vietnam War Memorial, the Lincoln Memorial and the Iwo Jima Memorial. It was an action packed day carefully orchestrated by a team of selfless volunteers who were quite skilled at keeping over one-hundred and fifty people moving in the correct direction at all times.

The memorials are stunning to see in person on any regular day but when you’re surrounded by the company of such great men, sharing harrowing tales of their service it becomes an emotional mixture of inspiration and heart ache. Some stories, so very personal and poignant, had never been told before and likely may not ever be told again. Of course, they’re not my stories to share so let’s just leave it at that.

What I can share is that there were more hands reached out and more pats on the back by passers-by than I had ever seen in my life. One pause at the stairs of the Lincoln Memorial began a steady stream of appreciative tourists who shook Ted’s hand and thanked him for his service. The line began with a Korean couple who spoke no English but motioned in the universal take-a-photo-with-me language, to which Ted obliged. Moments later Ted was circled by teen aged students from Ohio, then California and then Kentucky. Each group was on their respective school trip. Ted had actually retired from the school system having been a teacher, a principal and eventually a superintendent. It was as though they knew that he simply adored students. He was like the Pied Piper of children and held court in front of Lincoln for quite some time.

As the sun began to set on our whirlwind day we returned to the Baltimore airport for the flight home. The final surprise for the veterans was a thunderous crowd of a couple thousand people who had gathered at RSW to welcome them home. For many it was the first welcome home that they had received. Bless the hearts of the May 2nd crowd for toughing it out for an extra few hours, as there were unexpected flight delays. The crowd formed a tunnel that the veterans passed through, which ran the length of the entire terminal to the waiting, curbside motor coaches. It was a proper welcome home to punctuate the day honoring their service and sacrifice to our nation.

If you’d like to participate in the next welcome home, Collier County Honor Flight Mission Six is on June 20, 2015 at RSW in Fort Myers, Fl. You can learn more about Mission Six, becoming a guardian or a veteran on a future flight by visiting www.CollierHonorFlight.org. There is a video chronical of Mission Five available at www.tinyurl.com/CollierHonorFlight.

This Article is Special To Southwest Spotlight Magazine.