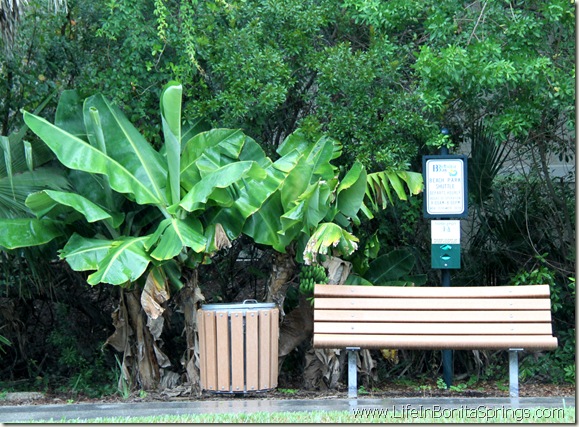 Truth be told, I was on my way to surveil the circuit training path at Bonita Bay’s River Park when the sky opened up and it began raining like crazy. I actually passed his bench up and then realized that there were banana trees growing beside it and there was actually a hand of bananas … so I backed up and took this picture.

Only in Bonita Springs would there be a bunch of bananas growing beside a bus bench.  Bonita Bay has benches for the residents to catch a ride to the beach park on Bonita Beach.  It’s one of the amenities of Bonita Bay. You just wait on the bench and the bus comes by a the posted interval times and takes riders to the Bonita Bay beach pavilion.  Disclaimer: Not all Bonita Bay benches have bananas but they have the potential to grow them. :) This bench is located on Country Club Drive close to Monterra.