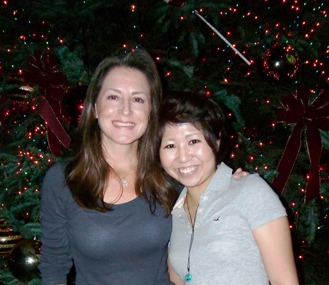 The Year in Review - And a Christmas Story

The year 2007 brought me more of the unexpected than I could have imagined.  If you were to have told me last year at this time how many new people I would know from all over North America I wouldn't have believed it.  Because of my blogging and internet exposure life changes quickly and dramatically.

I am still in awe, especially during this holiday season.  So many people have been so kind to this bumpkin from Bonita Springs.  It has caught me off guard.  The amount of cards and emails that came to me for the holidays, and even Christmas gifts has floored me.  I won't "out" my gift givers on the net, but I do thank you and appreciate you thinking of little old me.  I had planned on going thru the quietest Christmas of my life and was surprised and honored by the thoughtfulness of others.

Usually, I try to be somewhere over the holiday period and didn't go anywhere this year to spend Christmas with my parents fearing it would be my Mother's last Christmas, as she has been seriously ill.  I stayed put and at the last minute my parents flew back to Cleveland, Ohio to be closer to the Cleveland Clinic.  So here I sit in Bonita Springs.  I figured it would be just me, the dog and the movie cube at the grocery store.

A few days ago things changed.  I mean really changed.  I have an outside blog called Life in Bonita Springs.  I wouldn't likely have built it without having spent the last year or so on Active Rain.  I was posting so much local information about Bonita Springs on Active Rain I decided to start putting it in my own blog.  No I didn't, Bob Carney actually shamed me into it.  (Thanks Bob and thanks to Linda Davis and Sarah Cooper for backing him up.)

This week one of my local posts grabbed the attention of an out-of-towner who contacted me for further information.  It turns out that my reader is a college student, but not an average college student.  She is from Japan studying in Alabama.  She wasn't able to get her ticket home to Japan for the holiday so she decided to come to Bonita Springs by herself, just for something to do, without a car.  How's that for brass?  I found out that her hotel is two blocks from my house and after several emails back and forth I invited her for dinner and she took me up on the offer.  We also had lunch today also (after my distance record run), tried to find a post office without horrific lines and learned what the Bass Pro Shop is.  By the way, it's for guys that fish and women that want to wear camouflage Santa hats.  Yes, they sell camo Santa hats at Bass Pro Shops and yes, we saw a woman wearing one.

At any rate, the student's name is Ayumi and she's just a doll, a real sweet heart.  I just wanted to share with you all at Christmas what a great thing my local posts have now brought to me.  This was more fun than business!

I'll do my best to show Ayumi around Bonita Springs, Estero and the finer points of Southwest Florida.

We've already hit Riverside Park, Gulfcoast Towne Center and Sushi Thai of Naples.  Although she was probably hoping for more local cuisine I told her she went half way around the world to find someone that prefers sushi and Asian food.  Next week I promise to take her to the best pizza in Bonita Springs, AA Two Brothers Pizza to meet Sal and Bob.  Pizza is her favorite!

Now who would have guessed that a local post about Bonita Springs Florida would help me meet someone from Osaka Japan?

*If you're a local reading this post, where else should I take Ayumi to experience Bonita Springs.  I'm open for suggestions.*